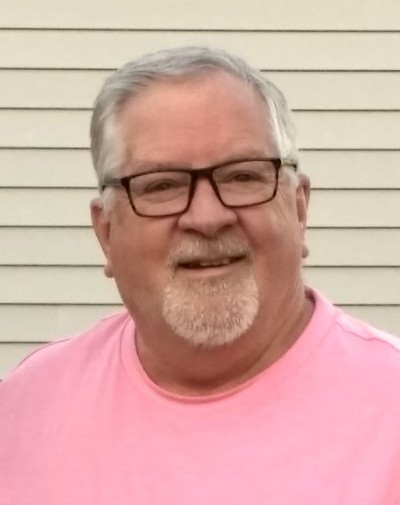 Daniel's service will be livestreamed below at 2 PM Saturday December 11, 2021. Daniel Holte, 66, West Fargo, died from Covid-19 on December 6, surrounded by his family, taking his final journey to meet The Lord. Dan was born May 14, 1955 in Hibbing, MN to Marian (Heald) and Philip Holte. He attended many schools until his family settled in Parkers Prairie, MN where he graduated. He married Darlene Krumm settling in Moorhead. He was blessed in this union by two beautiful daughters. In 2001, he married Susan Brokofsky. They lived in Dilworth before moving to West Fargo. Dan was a beloved husband, father, grandpa, brother, and friend. He was quick with a joke or story or a good laugh. His greatest joy was seeing his family, especially the grandkids. Nothing made him smile more than a little one running toward him yelling, “Grandpa.” He was so proud of the women his daughters had become, and the perfect choices they had made in picking their husbands. He loved reminiscing about when his daughters were little. Danielle sneaking out to watch “Cheers” with him long after she should have been asleep. And Tiffany, who broke her arm and had a cast on it, liked to beat her older sister with her cast. He enjoyed being a dad, loving the special time he had fixing supper, giving baths, and putting them to bed. Being separated from them when he moved to Salt Lake City was one of his darkest hours. He missed them so much, even though he loved it there, he moved back to be closer to them. Fortunately, God’s plan was for Dan to reconnect with Sue, who would become his wife. The love he had for her was evident in the way he looked at her. Dan was happy to show his love for Sue. Holding hands and kisses were there until the end. As relatives and friends jokingly said, “a true love connection.” Through all of Dan’s medical challenges, Sue was his biggest advocate, much to his dismay, at times. He loved to get together with friends, going out to eat, sharing an adult beverage, or having a fire in his driveway. He’d light the fire, snap a pic, text it to the neighbors and soon there would be 10 – 20 people gathered for conversation with Dan and Sue. It even made the local paper! He definitely was a Green Bay Packer fan saying, “There are only 2 kinds of football fans: those that are Packer fans and those who wished they were.” Dan loved to talk about the Viking vs Packer game he and Sue attended at US Bank Field. The Vikings lost which was even better! Dan enjoyed travelling: from tent camping trips with his dad, mom, and sister, spending time in the Boundary Waters with the Youth for Christ organization, to a honeymoon trip with Sue to the Duluth area, staying at Gooseberry State Park. He was disappointed when he was no longer able to go camping because of the disease Myasthenia Gravis (MG). But he still travelled: Chicago, Cleveland, Nashville, New Orleans, Orlando, St Louis, San Francisco, and even the BIG ISLAND. The last BIG trip was a 3-week working vacation to Las Vegas for a Shaklee Convention. He and Sue saw 14 states, many national parks, including the Grand Canyon. They spent 3 days in Salt Lake City seeing the places and things he enjoyed while he lived there. Oh, the stories he told about growing up in Parkers. He worked at Parkers Superette, owned by his parents. He also worked for a local farmer. He got another Big Sister, Pam Severson, who is Sandy’s best friend. Pam always called him “her little brother.” He played on the Panther football and golf teams, even going to a state championship for golf. Golf was a lifetime passion for Dan. He played in Nashville, at Gaylord Spring Golf Links, getting heat stroke ‘cause he didn’t want to quit, even though the temperature was 114. After he shot a round at Bully Pulpit in Medora, he said, “He had gone to Golf Heaven!” He had a collection of over 30 GOLFING SANTA’s. And he loved decorating the outside of the house for Christmas and every light had to be just so! Dan worked at Village West Barber Stylists and Shear Magic as a Master Barber. He started selling furniture, working over the years at Slumberland, TLC, Furniture Mart, and Conlin’s. In May 2013, he was diagnosed with Myasthenia Gravis (MG) and in 2014, he medically retired. Over time it severely limited his ability to do anything that required strength in his muscles. He faced the new challenges that MG brought, he adapted and still found joy in each day saying, “There is life after what happens to you.” He found Freedom Resource Center for Independent Living, who helped him, pairing him with a peer mentor who had a similar affliction. He eventually became a peer mentor himself and served on the Board of Directors for Freedom. He continued to help Sue cook, loved beating her at cribbage, watching MASH and the Andy Griffith Show, and connecting with all those whom he called friends. Many of them reached out to us sharing stories of Dan and how he brought joy into their lives. He fought MG with all he had and as one of his MG Facebook friends said, “He was a warrior, until he could fight no more.” Dan was a member of Triumph Lutheran Church and proudly served as an usher and usher coordinator. He is survived by his wife, Susan; daughters, Danielle (Patrick) Schaff, and Tiffany (Patrick) Myklebust; grandchildren, Miles, Walter, and Harley Schaff, Aaliyah Holte, and Liam Myklebust; his sister, Sandy (Kim) Larson; his other big sister, Pam Severson; extended family; and many friends. He was preceded in death by his parents. A Celebration of Life will be held at 2 PM Saturday, December 11, 2021 at Boulger Funeral Home. Note: There will also be an informal Celebration of Life in the summer of 2022. Watch for the announcement on CaringBridge.org