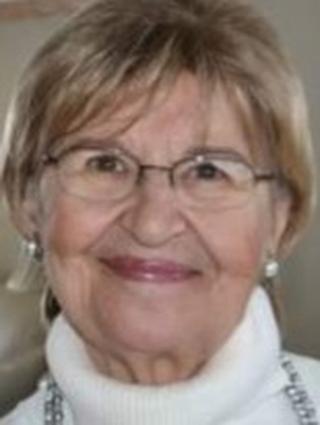 Margaret (Marge) Kathryn Olson age 94 died on December 5, 2021. She was born on March 22, 1927 to Rose (Knoll) and Joseph Stumpf. Marge grew up on the 4 Square Ranch, 3 miles west of Mandan, ND. She was from a large German-Russian family. Her parents and eleven siblings pre-deceased her. Marge married Edwin Olson on June 25, 1946. They were world travelers; South America, Africa, Russia, Europe, and China were some of the places they traveled to. Marge and Ed owned A-1 Olson Typewriter Company in downtown Fargo for over 30 years. Marge belonged to “Catholic Daughters” since 1957 and was a member of the Blessed Sacrament church in West Fargo. She was an aunt to many nieces and nephews. Marge was a devoted wife and mother. She is survived by her husband Edwin Olson, daughters Deb Olson Frey (Jeff), and Pamela Olson James (Steven), grand children Krystal, Nick Frey, Sean Kennedy (Valerie Green), Erik Haines, and great-grand child Weston Green-Kennedy. Thank you to Sanford Hospice for the care you have shown Margaret. There will be no funeral services however, arrangements will be made by Boulger Funeral Home.