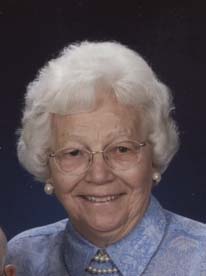 Arlene Erickson, age 88, of Fargo passed away in the presence of her family Monday, March 23, 2015. She was born and raised in Aurdal Township in Ottertail County, Minnesota. She was baptized and confirmed at Bethlehem Lutheran Church and graduated from Fergus Falls High School.   She met Lloyd Erickson when he moved to Fergus Falls to begin his broadcasting career at KGDE Radio. They married on August 26, 1945 and began their life together in Jamestown, ND. Arlene’s life was devoted to her husband and family. Lloyd and Arlene were married for 66 years. They shared a love of nature and spent many an afternoon going for a drive with a thermos of coffee and some cookies. They also enjoyed camping and sitting around the fire. Arlene was the hub of the family, and tirelessly cooked and baked for many family gatherings. She especially liked to prepare family dinners with a touch of refinement, using her china, table linens and fresh flowers. She participated in Volksmarches and volunteered at the Sons of Norway.   After the death of her son Michael in 1975, Arlene was instrumental in the startup of a local PFLAG group in Fargo Moorhead. She was actively involved at First Lutheran Church of Fargo as long as she was able. She still participated in the Ruth Circle. Arlene is survived by her five children, eleven grandchildren and twelve great grandchildren. Chuck (Betty Jo) Devils Lake; Stacy Ladabouche (Gary) Rutland, VT; Brian Erickson (Erika) Lakeland, TN; Kevin (Erica) Denver, CO. Mary Tron (Philip) Moorhead; Sarah Tron Fargo; EmilyTron Minneapolis. David (Jane) Fargo; Zachary (Taryn) Duluth; Leah Paulson (Zachary) Moorhead; Hannah Erickson, Fargo. Paula Olmstead (Brian) Moorhead; John Olmstead Moorhead; Paige Olmstead Minneapolis. Nancy Mykleseth (Jerry) and Olivia Moorhead. She was precede in death by her husband in 2009, son Michael and infant daughter, her parents Emma and Alfred Bredeson, her siblings Orville, Eldore, Gladys, and Lillian. Visitation will be from 5-7pm, with a prayer service beginning at 7:00pm on Friday, March 27 at Boulger Funeral Home in Fargo. Funeral Services will be held on Saturday, March 28 at 11:00 at First Lutheran Church in Fargo. Burial will be at Sunset Memorial Gardens, Fargo.