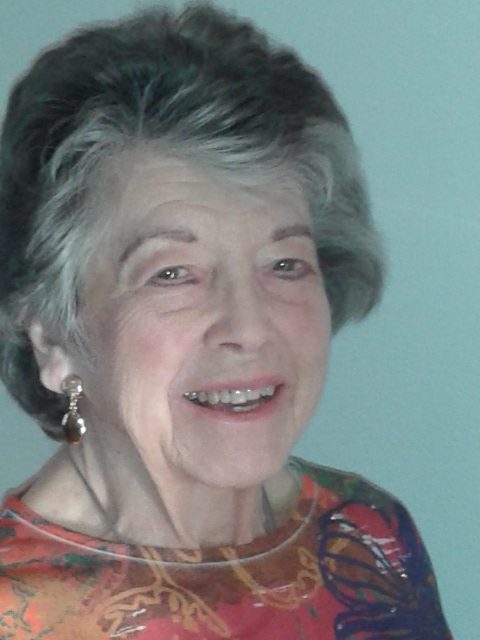 Beverly Blanich was born November 13, 1923 in Bismarck, ND, to Joseph (Joe) and Gertrude Halbeisen. She grew up in Fargo and from an early age was involved in creative pursuits. From the age of six, she took dance lessons at the Early School of Dancing and for several years she studied art with Sister St. Anne at the Sacred Heart Academy. Bev was musically inclined with the ability to play by ear (apparently only on the black keys) and had a lovely natural singing voice. She graduated from Fargo Central High School in 1941 and from North Dakota State University (then NDAC) in 1945. Active in numerous campus organizations, she was president of her sophomore and senior classes and of Kappa Alpha Theta Sorority. Throughout college, she played significant roles in numerous Little Country Theatre productions, including Eliza Doolittle in “Pygmalian.” Her acting successes under the mentorship of Alfred Arvold at LCT led to a scholarship to the Priscilla Beach Theatre in Plymouth, MA, for a season of summer stock her junior year, and instilled in her a life-long love of the theater. In January 1946, Bev and friend June Dobervich initiated the meeting that launched the Fargo Community Theater, which opened with its first play, “My Sister Eileen,” that spring. She appeared in many of its productions and served on an early Board of Directors. Importantly, Bev met her future husband Lewis D. Blanich at the first organizing meeting of the FMCT. They were married on August 27, 1954 in the First Presbyterian Church of Fargo and had two daughters, Tamara and Tania. Bev established the Halbeisen School of Dancing in 1947 and began a 41-year career of teaching, performing, staging dance recitals and entertaining at events throughout the community. She remained interested in perfecting her craft, and spent summers studying in the early years of the school. Notably, in the summer of 1947, she studied with Princess Nina Cacciolo (formerly of Nijinski’s ballet company) and others in Miami, and the summer of 1948 at Carnegie Hall in New York with ballet masters such as Anton Dolin and Anthony Tudor, former principal dancers of the Ballets Russes de Monte Carlo, and with Alexandra Danilova, prima ballerina of the Ballets Russes. Over the course of her career, Bev taught more than 2,000 students. Apparently unable to fully retire from teaching (she closed her school in 1988), she taught aquarobics for 17 years at the Fargo YWCA. During her retirement, she also enjoyed traveling, most often to New York or Chicago to visit her children. Bev passed away peacefully on March 22 at the age of 96 at home with her daughters at her side. She was preceded in death by her husband Lewis, her parents, and her sisters Jean (Ernest) Hector and Dorothy (Lloyd) Sveen. She is survived by daughters Tamara Blanich and Tania Blanich and numerous nieces and nephews. A memorial service will be held at a later date. Memorials may be sent to the Alfred G. Arvold Scholarship for Theatre Arts (through the NDSU Foundation) or to Hospice of the Red River Valley.