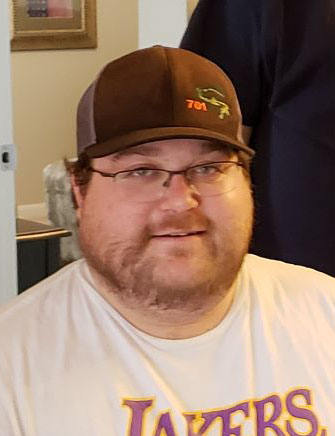 Calvin Jacob Armbrust, 27, Fargo, passed away Saturday, December 7, 2019 from medical complications. Calvin was born October 14, 1992 was baptized at Nativity Catholic Church and attended school at Centennial Elementary, Discovery Middle School, Fargo South High and NDSU. Calvin was always active in school sports playing soccer in the summer and hockey in the winter. He was a “stud.” His interest continued in sports as an adult. He was an avid fan of NASCAR, Duke basketball and college football; especially the NDSU Bison. He enjoyed trips to Frisco and cheering for his favorite team with his close group of friends and family. He loved music, fishing, hunting, the lakes and many snowmobiling trips to Yellowstone and The Big Horns with his dad, brother Ben, and friends. Calvin was very supportive of his brother, Adam, often spending time with him and going out for dinner. Calvin was passionate about his pet snake, Stevie. He will be remembered by those close to him by his kindness and big heart. Left to cherish his life and memory are his parents, Kim Armbrust, Fargo, Dan and Shelly Armbrust, Fargo, siblings Adam Armbrust, Fargo, Benjamin (Sydney) Armbrust, Fargo, Mickenzie (Zak) Bergstrom, Mayville, Logan Omberg, West Fargo, grandparents: Mary Ann Armbrust, Fargo, Max and Jane Gilbraith, West Fargo, aunts and uncles: David (Sabina) Armbrust, Sarasota, FL, Steve (Chris) Armbrust, Kindred, Jane (Tim) Pettinger, Fargo, John Armbrust, Christine, Steve Gilbraith, Isanti, MN, Brian (Cheryl) Gilbraith, Billings, MT, Kevin Gilbraith, Coon Rapids, MN, Kelly Stone, Tulsa, OK, Joseph Gilbraith, Fargo, Lisa (Keith) Van Dyke, Maple Grove, MN, niece Piper Bergstrom, Mayville and numerous cousins. Calvin was preceded in death by his grandfather Mark Armbrust and aunt Mary Gilbraith. Visitation will be from 10:00 am to 11:00 am followed by a Memorial Service at 11:00 am on Friday, December 13, 2019 at Boulger Funeral Home in Fargo. Interment will be at Holy Cross Cemetery South Fargo. It was Calvin’s turn this year to choose the theme for the family Christmas party. He asked everyone to choose a charity of their liking and either give money or volunteer time to that organization. At the Christmas party everyone would be able to share who they chose and a little bit about that charity. In lieu of flowers we suggest you give to a charity of your choice in his memory. Arrangements entrusted to the care of Boulger Funeral Home and Celebration of Life Center. To sign the online guest book, go to www.boulgerfuneralhome.com.