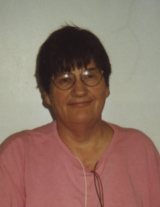 Kay passed away on Saturday, November 4, 2017 at her home near Blanchard, ND at the age of 76. Kathryn Irene Beckman was born on February 21, 1941, the daughter of Herbert and Hazel (Madsen) Beckman in Fargo, ND. Kay was baptized on April 13, 1941 and confirmed on May 20, 1956 at St. John Lutheran Church in Hillsboro. She grew up on the family farm near Blanchard, ND, where she received her education. Kay graduated from Hillsboro High School in 1959. She was united in marriage to James Andre on October 2, 1959 and they made their home on a farm near Galesburg, ND. In 1961 they moved to Blanchard, ND where they have lived since that time. Kay was a lifelong member of St. John Lutheran Church in Hillsboro where she was active in the LWML. She was part of the Blanchard Homemaker’s Club and also worked at the Hillsboro Dairy Bar after raising her children. Kay will be remembered as a loving wife, mother and grandmother and a special friend to many. Kay is survived by her husband, James of Blanchard; her children – Lori Buhr, Debbie (Todd) Sanders, and Jeff Andre all of Fargo, ND; her grandchildren – Jennifer (Cal) Krogen, Trista (Chris) Bitz, Joshua Buhr, Amber (Jason) Welsh, and Morgan Sanders; and her great-grandchildren - Noah and Tanner Krogen, Elliott and Olivia Bitz, Dakota Forney, and Tegan and Rylen Welsh. Also surviving are her brother, Ken (Mary) Beckman of Hillsboro; several very special nieces and nephews; and her beloved canine companion, Hunter. Kay was preceded in death by her parents. FUNERAL SERVICE: 11 AM Thursday, November 9, 2017 at St. John Lutheran Church in Hillsboro PRAYER SERVICE: 7 PM Wednesday at St. John Lutheran Church in Hillsboro VISITATION: 5-7 PM Wednesday at the church – and also one hour prior to the service in the church on Thursday BURIAL: St. John Cemetery near Hillsboro