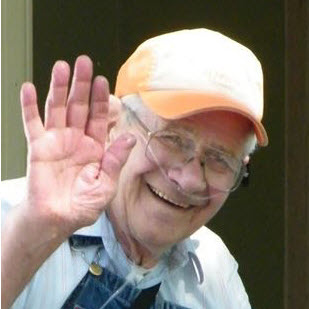 Clayton B. Lee, 86, Abercrombie, North Dakota, died Thursday, November 30, 2017 at Sanford Medical Center, Fargo, North Dakota. Clayton was born January 24, 1931 in rural Abercrombie Township near Colfax, ND to Lars and Helga(Bolstad) Lee, the youngest of their 9 children. Early in life Clayton acquired the nickname "Bugga" and he was known by that name all his life. He attended rural grade school at Pitcairn and high school in Colfax graduating in 1949. He enlisted in the US Air Force in March of 1951. Eighteen months of his tour of duty were spent in Okinawa. On September 12, 1951, he was united in marriage to Mathilde Joan Trove of Walcott, at Viking Lutheran church, rural Wyndmere. They lived in Adelanto, California while Clayton was stationed at George A. F. Base during which time their two oldest children, Michael and Rebecca, were born. Following his discharge from the service in 1955 the family moved to Wahpeton, ND, where Clayton enrolled at North Dakota State School of Science(NDSSS) in the pre-apprentice bricklaying class. Upon completion of the course, Clayton took up the trade of bricklaying. Four more children were born while the family resided in Wahpeton; Jesse, Lars, and twin daughters Camille and Carla. In September of 1964 the family moved to a farm near Abercrombie where Clayton farmed and continued his bricklaying. During these years, their 7th child, Amy, was born. Clayton and Joan spent most of their lives together raising their children and grandchildren in the Abercrombie area. In 1989, they moved to their current home in Abercrombie. Clayton enjoyed a “second career” later in life when he began his position as custodian at Richland #44 Elementary School, Abercrombie, ND. He spent many years taking pride in waxing floors and cleaning classrooms, as well as fixing zippers and repairing snow pants. He loved each of the children that walked those halls, and he was always willing to help the teachers with any project for which a handyman was needed. He retired from the school in, May 2004. Clayton is survived by his wife of 66 years, Joan; children; Michael (LouAnn) Lee, rural Abercrombie; Rebecca (Joel) Forness, rural Abercrombie; Jesse Lee, Pierre, SD; Lars (Katy) Lee, Cedar Rapids, Iowa; Camille (Carl) Knowlton, Ashland, Massachusetts; Carla (Mark) Andersen, Omaha, Nebraska; and Amy (Jim) Lehmann, Abercrombie; 17 grandchildren; Kaaryn, Christopher, Kristi, Seth, Emily, Hilary, Noah, Clayton, Lars, Carl, Caroline, Andrew, Peter, John, Luke, Jacqueline and Nele; and 16 great-grandchildren; lifelong friends that were like their children, Lertchai & Varumpon Ninsalab, Bangkok, Thailand; brother, Herbert (Shirley) Lee, Olympia, Washington; sisters-in-law, Pearl Lee, Fargo; and Sylpha Lee, Abercrombie. He was preceded in death by his parents; brothers, Melford Lee, Oswald Lee, Arthur Lee, Oscar Lee, Kenneth Lee, Willard Lee and his sister Thordis K. Danielson; brother-in-law, Vernon Danielson; sisters-in-law, Ruth Lee, Angie Lee, Phyllis Lee, and Betty Lee. Military rights will be performed at Boulger Funeral Home by the North Dakota Air National Guard and Abercrombie Legion Post 128. Funeral services will be held Saturday December 16, 2017 at Boulger Funeral Home, 123 10th Street South, Fargo, ND 58103 at 10am with visitation from 9-10am - Pastor Thomas Reagan officiating. To sign the online guestbook go to www.boulgerfuneralhome.com