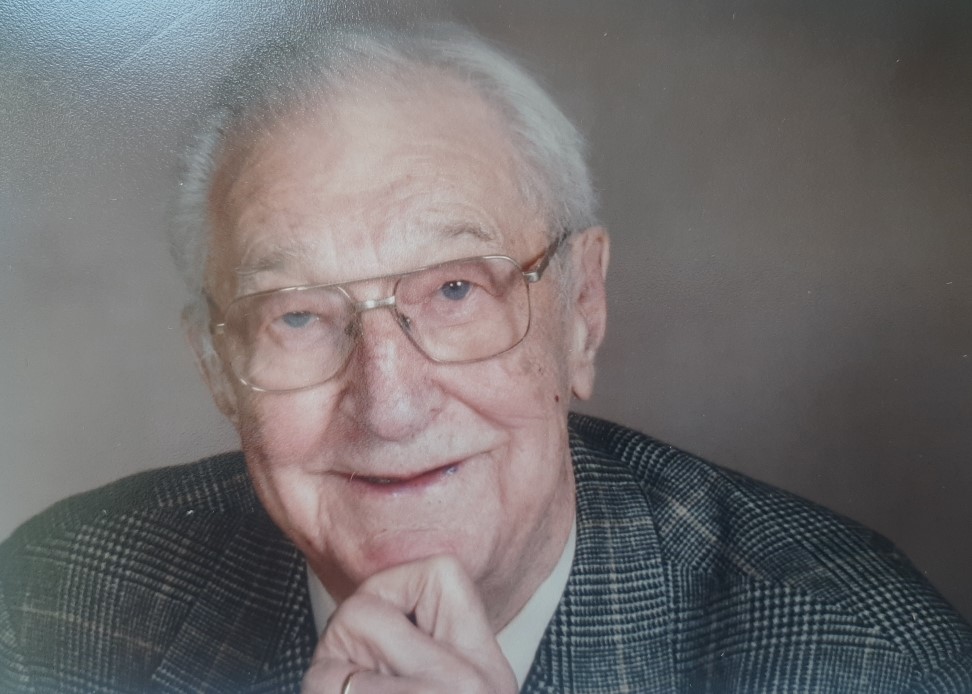 Clyde’s service will be live streamed below starting at 10:45 on Wednesday (we are reliant on the wifi signal at the church, if something happens to that signal, the service is being recorded and will be posted after the service:)

Our dear dad, Clyde Ahlschwede, 97, West Fargo. ND, passed away May 26, 2022 at Sheyenne Crossings, surrounded by his loving family.

Clyde Herbert Ahlschwede was born the ninth of ten children to George and Luise Ahlschwede, April 18, 1925, in Grandin, ND. He was baptized in the Christian faith May 17, 1925, at St. John’s Lutheran Church, Bohnsack Township, ND and confirmed at Grace Lutheran Church, Grandin, ND, July 16, 1939, his confirmation verse being “for where two or three gather in my name, there I Am”, Matt 18:20. He grew up rural Grandin where he attended school until he graduated from high school in 1943. Clyde, being a short 6’4”, enjoyed playing high school basketball and continued on the Independent league after graduation. He farmed with his father on the family farm two miles south of Grandin. June 19, 1948, he married Mavis Ponto from Blanchard, ND. They lived on the Ahlschwede farm and raised their family until his retirement in 1990 when they moved to Fargo. Mavis died in 2014 at age 90 after 66 years of marriage.

Clyde loved the earth, nature’s changing seasons, and working outdoors. He often said it is where he felt closest to the Lord. He loved his Lord and lived his faith in gentle quietness. He was a jack of all trades and could build or fix anything. Hunting and fishing were some favorite times spent with friends and he enjoyed helping his neighbors with various building/repair projects. After his retirement he spent spring and fall helping neighbors in the fields and as a ‘fixer upper’ at Immanuel Lutheran Church, Fargo. Clyde served his community on several boards: Grandin Grace Lutheran Church, Lutheran Laymen’s League, Kinyon Township, Grandin School Board and Min Dak Growers Association. Clyde and Mavis together enjoyed music, dancing, traveling, entertaining, playing bridge, golfing, and spending time with their grandchildren at their lake cabin on Little MacDonald Lake. Attending the grandchildren’s and many great nieces and nephews events was a highlight for them. They were blessed to have traveled to all 50 states, Germany, and Israel. Reminiscing, he always described their trip to the Holy Lands as a ‘trip of a lifetime’.

The family wishes to thank the many staff from Sheyenne Crossing who loved Clyde as one of their ‘favorite’ resident these past 10 years. They received excellent care and love from many of the staff and residents.

My farm to me is not just land
Where bare unpainted buildings stand
To me my farm is nothing less
Than all created loveliness.

My Farm is not where I must soil
My hands in endless dreary toil
But where, through seed and swelling pod
I’ve learned to walk, and talk with God

My Farm, to me, Is not a place
Outmoded by the modern race
For here, I think, I just see less
Of evil, greed, and selfishness.

My Farm’s a haven – here dwells rest,
Security and happiness –
Whate’er befalls the world outside
Here faith, and hope and love abide.

Clyde’s Video Tribute can be viewed below: