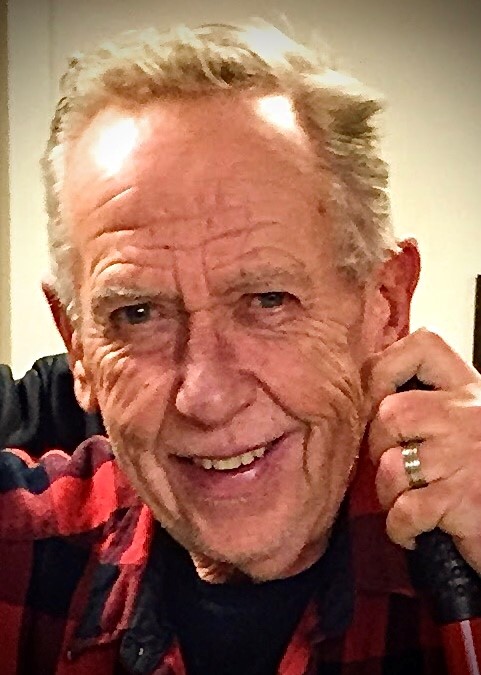 David's service will be livestreamed below starting at 10:00 AM Monday, February 14, 2022. David Leo Komrosky, 77, Fargo, ND, affectionately known as “Sparky” and “Pa” by his kids, died Monday, February 7, 2022 at the VA Hospital in Fargo surrounded by his family. Dave, the youngest of 7, was born in Valley City, ND on January 17, 1945 to Edwin and Amelia (Krege) Komrosky. He grew up and attended school in Valley City, ND. He studied Art at the State College there before entering the Navy in 1965. He served 4 years on 4 aircraft carriers in the Mediterranean Sea during the Vietnam War. After his honorable discharge from service, he moved to Fargo, ND working a short time for the Post Office and painting at Cook Sign. Later, he met and fell in love with his sweetheart, Eileen Johnson, at their favorite watering hole, the Nestor. They were married on Valentine’s Day in Herman, MN in 1976 and from this union 2 kids were born, Wyatt in 1977 and Wendy in 1984. He always said he felt like the richest man in the world after they were born. Dave and Eileen raised their family in Fargo where Dave started his own business in 1980, Dave’s Truck Lettering & Signs, working various contracts until the last few days of his life. Dave enjoyed gardening, flowers, taking in animals on his hobby farm, fishing, planting fruit trees at his farm and later his kids’ homes. There was nothing he wouldn’t do to help his kids, going out of his way to make sure they had everything, even if they didn’t really need it-they got it anyway! He loved to putz and tinker around in his garage, stoking his fireplace and working on random projects. He was very proud of his 2 sets of twin grandkids, supporting their sports, musical, and theatrical activities. He had a big sense of humor, making up jokes or ordering cheeseburgers with no cheese, which his grandkids still do to this day. He had a heart of gold and his strength knew no boundaries. He is survived by his ornery wife of 46 years, Eileen “Ludi Mae”, a son, Wyatt (Becky) and a daughter, Wendy (Kristen) all of Fargo. A brother, Jim Komrosky, of Minot, ND. 5 grandchildren: Amelia, Connor, Audrey, Tyler, and Isaiah. He is also survived by friends who became family, Benjamin (Melissa) Lynn of Swan Valley, Western Australia and their kids Ben Jr, Cody, Jedi, and Trizelle. He leaves behind 2 grand dogs, Juno and Rusty, many nieces and nephews, and cherished friends he met along the way. He is preceded in death by his parents, 3 brothers: Wayne, Gene, and Darrell, 2 sisters: Phyllis and Halcie.