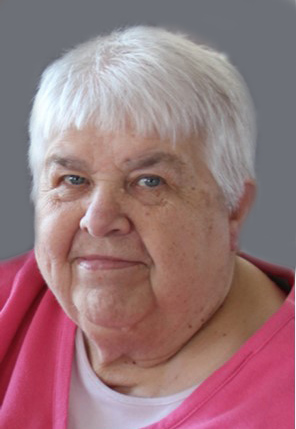 Diane's Funeral Service will be live streamed below: Diane (Bladow) Falk, 78, West Fargo, ND formerly of Hankinson, ND passed away peacefully with her daughters by her side on Friday, November 12, 2021 at Essentia Health in Fargo. Diane was born on May 7, 1943 to Raymond and Viola (Vedder) Bladow in Hankinson. She grew up on the family farm and graduated from Hankinson High School in 1961. On October 24, 1964, she was united in marriage to Charles “Pat” Falk. The couple made their home in Hankinson where they ran a successful business and raised their four children, Vincent, Rhonda, Nicole and Amy. Diane spent her life raising her family and supporting her husband’s business. She was an extremely hard-worker and would never shy away from a difficult task. She often said “If it was worth doing, it was worth doing right” which is a mantra she instilled in her children and grandchildren often encouraging them to do their best no matter the circumstances. Thanks to her tenacity and years of hard labor, she and her husband built a family cabin on Roy Lake in SD where her children and grandchildren continue to enjoy summer weekends. One of her fondest memories was taking the new pontoon on the water for its maiden voyage last summer to celebrate the 4th of July. Diane was an excellent cook and was known for her tasty desserts and down-home comfort-food. Cooking did not require a recipe in her opinion which made her an excellent “dump” chef. When asked once by her son-in-law Darin to share a recipe, the instructions went something like “stir until mixed”, and “cook until done”. That remained a running joke between them for years after. Her granddaughter Hannah had similar experiences when asking Grandma for help in cooking dinner over one of their numerous Facetime chats. “Just season it until it tastes”, Diane would say. “What does that mean Grandma, what is it supposed to taste like?” would often be Hannah’s response. No matter what limited instruction Diane provided, the outcome always tasted amazing. While raising her family, it was rare to find take-out on the family dinner table. Home cooking was important and Diane prided herself in teaching her daughters and grandkids how to cook and share in family meal time. Diane loved to scrapbook and often attended weekend retreats with friends where she enjoyed the conversation and company more than she did the craft. She was an avid volunteer with the Richland County Caregivers and Brightwood Homemaker Club and was always willing to lend a hand and use her gifts to help others. Despite her numerous hobbies and accomplishments, what Diane enjoyed most was spending time with her grandkids who so lovingly called her “Gummy”. When able, she never missed a concert, ball game, dance recital or piano performance and she prided herself on being a present grandma. Her generosity knew no bounds and it was not uncommon for her to slip each grandkid a crisp $20 bill just for showing up for a visit. “Well, they helped me and I have to pay them” she would say even though that help may have been limited to getting her mail or just sitting with her while enjoying a movie. She loved those kids dearly and bragged about them often to anyone who would listen. They will miss her terribly. Diane is survived by her daughters, Nicole (Bob) Christensen, West Fargo, ND; Amy (Darin) Dirkes, Baxter MN; grandchildren, Hannah and Isaac Christensen; Carter and Ruby Dirkes; special family, Josh (Lacey) Meyer, Rancho Santa Margarita, CA, siblings Harlon Bladow, Hankinson, ND and numerous nieces and nephews. Those waiting for her in heaven include her husband, Charles “Pat” Falk; son, Vince Falk; daughter, Rhonda Falk; parents, Raymond and Viola Bladow; brothers, Lyle Bladow, Charles Bladow, Carroll Bladow, and Harlow Bladow at infancy; as well as her beloved dog Daisy who never left her side. A funeral service will be held at 1:00PM on Tuesday, November 16, 2021 at Boulger Funeral Home and Celebration of Life Center, Fargo with visitation one hour prior. The service will be livestreamed on Boulger’s website. Burial will be held at 4:00PM on Tuesday, November 16, 2021 at the United Cemetery in Hankinson. Diane's Video Tribute can be viewed below: