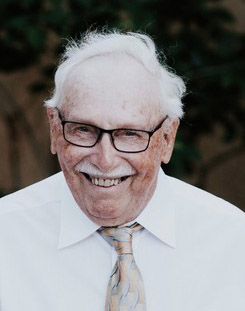 Donald Victor Kellerman, 95, passed away peacefully on March 17 in Sartell, MN at the home of his son. Don was born on March 8, 1924 to Fred and Hilda (Gohdes) Kellerman. He grew up on the North Dakota family farm the sixth of eight children. He graduated from Davenport High School. After high school he served in the US Army at Fort Bliss, TX and was honorably discharged in 1950. He returned home to work on the family farm. On November 28, 1954 he married Esther Griesbach after meeting her on a blind date. They were blessed with four children and raised their family on the farm in rural Davenport. He was a hardworking farmer who developed an alfalfa business know as Kellerman Hay Sales. He spent many long hours working those fields with his sons at his side. The only thing that could get him to stop the alfalfa equipment was rain or a ball game. He was a lifelong member of the Canaan Moravian Church. In 1982 Don and Esther moved from the farm to live in Davenport. He was a member of the Davenport Lions where he helped develop the steak fondu fundraiser for the Lions. He loved pulling the cooker with his van full of helpers to sites to cook those steaks. After 20 years living in Davenport, they moved to Heritage Square in West Fargo, ND. This didn’t stop Don from making trips to the farm as often as he could. This is also when he found a new hobby on his “Grasshopper” mowing ditches, yards, and the Canaan church grounds. He will always be remembered as a Bison fan from the days of taking his kids to NDSU games to making the trip to Frisco, TX to cheer the Bison on to a national championship. Don always took great pride in the farm and was so proud that his oldest son Brad and his grandson Brady have continued the tradition. Don moved to Bethany, an assistant living center, in 2018 and lived there until moving to MN for his last 45 days. Don is survived by his children: Brad (Lisa), West Fargo, Jeff (Hattie), Sartell, MN, Kevin, Parker, CO and Cheryl (Jack) Holm, Bozeman, MT, brother; Calvin, Mendota Heights, MN, sisters-in-law; Esther Griesbach Fargo, ND, and Leona Boisjoile, grandchildren; Amy (Justin) Perrin, Brady (Tonya) Kellerman, Hannah (Casey) Withers, great grandchildren; Callen, Jayden, Kylee, Lucy and special friend Bev Kellerman. Don was preceded in death by his wife Esther in 2010, and by siblings Fred, Ramona, Lester, Harold, Marvel, and Shirley. The family would like to extend their thanks to St Croix Hospice, Sartell for their exception care of Don. He often spoke of their care as treating him like a king. Visitation will take place from 10:00 to 11:00 AM followed by a memorial service at 11:00 AM Saturday, March 23, 2019 at Canaan Moravian Church rural Davenport, ND.