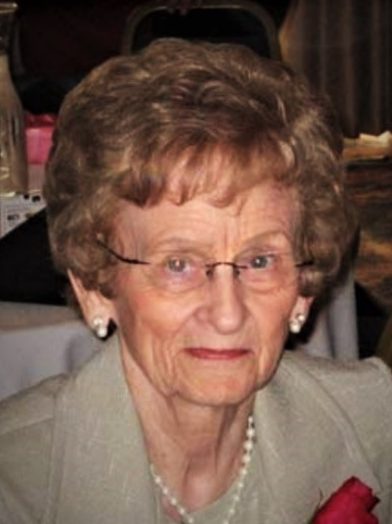 Dorothy's Prayer Service can be viewed below: Dorothy Catherine (Bechtold) Wieland passed away on Tuesday November 2nd at Eventide Sheyenne Crossing. Dorothy was born on July 22, 1928 to Peter & Catherine (Uthe) Bechtold in St. Joseph, MN. She graduated from Tech High School, St Cloud MN in 1946, upon graduation she was employed by Sears in St. Cloud. She moved to Jamestown, ND in 1948, where she was then employed by the S&L Store. Dorothy met the love of her life, Arthur G. Wieland, in Jamestown and they were married August 7, 1950. They had four sons and Dorothy chose to be a stay-at-home mother until her boys left home. After Arthur’s retirement, they moved to the Fargo/West Fargo area to be closer to family. Dorothy was always very active in her faith and church. She devoted much of her time volunteering time to many church activities. She enjoyed traveling, sewing, crafts, the occasional game of golf, watching the Minnesota Twins, Bison football as well as playing cards with family and friends. She was a fantastic cook and baker, making many dishes from her German heritage and also passing those recipes down to her children. She especially enjoyed spending time with her grandchildren and great grandchildren, they were the light of her life. She will be remembered as a devoted wife, a loving and caring mother and grandmother, a kind and thoughtful sister (in-law) and a loyal and dedicated friend to many. She was a mentor and care giver to many and we will all miss that big greeting hug she gave to us all throughout her life. Dorothy is survived by her sons, Terry (Sharon), Horace, ND, Greg (Carilyn), Grand Rapids, MI, Jeff (Genny), Sioux Falls, SD and Doug (Joyce), Woodinville, WA and 8 grandchildren and 15 great-children, her brothers George (Danna) Bechtold, St Cloud, MN, Del (Marilyn) Bechtold, Anaheim, CA, sister-in-law’s Lucy Bechtold, St. Cloud MN and Eileen Bechtold St. Cloud MN. Along with many nieces and nephews and their families. The family wishes to thank the staff at Eventide Sheyenne Crossing as well as the staff of Hospice of the Red River Valley for their wonderful and compassionate care. She was preceded in death by her husband Arthur, her parents Peter and Catherine, sister and brother-in-law Florence (James) Johnson and brothers Louis Bechtold and Charles Bechtold.