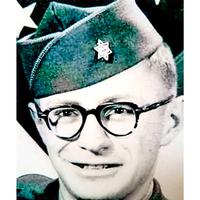 On Sunday, January 20, 2019, Elvin James Lee died peacefully in the presence of loved ones at Bethany Retirement Living, after a long and courageous battle with Alzheimer’s disease. Elvin was born on November 29, 1927 in Fairview, MT to the Reverend Elmer Lee and Jennie (Husfloen) Lee. He moved with his parents to Hannaford, ND in 1930, where he grew up with and helped take care of his seven mischievous younger brothers. Elvin excelled in school and developed a passion for chemistry and mathematics as a teenager. In 1944, after his junior year in high school, his scholarship was recognized and he was recruited by Concordia College to attend undergraduate studies in Moorhead, MN. Elvin graduated from Concordia with honors taking a B.S. in Chemistry and Mathematics in 1948. Degree in hand, Elvin moved to McClusky, ND to teach for a year. This experience led him to further pursue his own education, and after working on farms in rural ND to earn more money he moved to St. Louis in 1950 to attend postgraduate studies in chemistry at Washington University. Fate intervened in the form of the Korean War, however, and before finishing Elvin was drafted into the army in 1951 where he served honorably until 1953. In 1956, Elvin met the love of his life, Ruth Ingeburg Manigk, a German immigrant who moved to Fargo under the auspices of the Lutheran World Federation and sponsorship of Bethany Rest Home. On December 16, 1956, they were united in marriage during a classic North Dakota blizzard in a ceremony officiated by the Reverend Elmer Lee. The couple soon moved to Chicago to begin their new life and family. In years following they made their home in Oak Ridge, TN where Elvin worked at the Oak Ridge National Laboratory as a chemist dabbling in nuclear science, and in Chicago IL where he worked for Amoco as a FORTRAN programmer. The couple returned to Fargo in 1975 where they lived until 1992, moving again to Tennessee where they enjoyed gardening and the beauty of the Appalachian Mountains. In 2003, the birth of twin grandchildren lured them back to Fargo where they enjoyed watching their grandchildren grow. To say that Elvin had a passion for mathematics would be an understatement. He spent countless hours calculating formulas to prove theories in the science of amicable numbers, where his discoveries are documented in journals published by the American Mathematical Society. Elvin deeply loved his children and grandchildren. He was a child at heart, building igloos in the winter and sandcastles at the beach in the summer, helping his children with chemistry and math homework, and playing backyard baseball with his grandchildren. He was known for his delicious pies, skillet popcorn, and homemade pizza. He took pride in the fact that he could recite Pi to many digits and outsmart anyone in a game of Trivial Pursuit. Above all, he was a humble and gentle soul with an incredibly brilliant mind. Elvin is survived by his son Eric Lee, Sacramento, CA; his daughters, Gloria (Jesus) Martinez, Chicago, IL; Margrit Schwartz, Fargo; grandchildren Geoffrey, Alexis, Donald, Dennis, Joshua, Hunter and Isabella; and six great-grandchildren. He was preceded in death by his wife, Ruth Lee; parents Elmer and Jennie Lee; and brothers, Luther Lee and Gerald Lee. It is requested that any memorials be sent to Bethany Retirement Living at 201 University Drive, Fargo. A memorial service will be held in June with details announced at a later date.