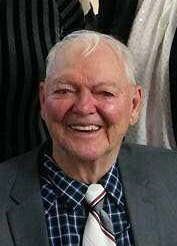 Ernest Simenson, 90, Fargo, ND passed away on Tuesday, April 23, 2019 at Eventide Sheyenne Crossings in West Fargo. He was born on February 13, 1929 to Magnus and Alice (Stenberg) Simenson in rural Kindred, ND. He grew up on the family farm where he was born and baptized. Ernest attended country school in rural Kindred. In 1949, Ernest was united in marriage to Marlys Johnson. The couple made their home in Fargo where they raised their two daughters. Ernest began his career at WW Walworks. He then became an over-the-road truck driver working at Buckingham, Lewis Truck and BN Transport. He retired from Burlington Northern at the age of 62. Ernest was a member of Elim Lutheran Church since 1952. He was also a member of Teamsters, Sons of Norway, Moose Lodge, and Eagles. He loved fishing, hunting, swimming, and waterskiing. Ernest cherished the time he spent with his grandkids. He is survived by his wife, Marlys; daughters, Marcia (Wayne) Schott, Walker, MN; and Sheila (Juan Jose Perez-Barrera) Perez, Monterey, MX; brother, Conway Simenson, Fargo, ND; 8 grandchildren; and 15 great-grandchildren. He was preceded in death by his parents; and brothers, Allen and Donald Simenson. There will be a funeral service at 2:00 PM on Friday, April 26, 2019 at Elim Lutheran Church, Fargo with a visitation one hour prior.