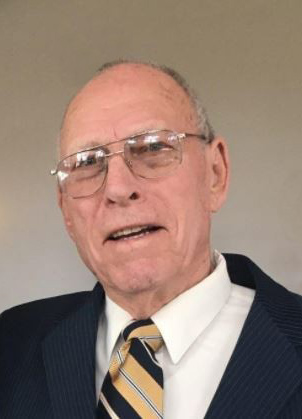 Ernest's Live Streamed Funeral Mass can be viewed below (we are reliant at the church for their wi-fi signal. If something happens to that signal, the funeral is being recorded and the recording will be posted later: Ernest's Live Streamed Prayer Service can be viewed below: Ernest (Ernie) L. Steinman passed away peacefully surrounded by family on January 7, 2022. Born in Tower City, North Dakota on March 15, 1927, to Leo and Mary (Walz) Steinman, he grew up in Carrington, North Dakota. and graduated from Carrington High School in 1945. He has an associate degree in machine shop practices and tool and die making from Dunwoody Institute in Minneapolis, Minnesota. Ernie was married to Alice White on June 28, 1954. He leaves his wife Alice, sons David (Sheryl), Dan (Karen), Dennis (Teresa), Paul (Staci), daughters Judy (Scott), Mary (Kyle), Cathleen (Mike), Christina (Jeff), twenty-three grandchildren and six great grandchildren. Ernie worked in his father’s blacksmith and welding shop during his years in high school. After returning from military service, he became a partner with his father. The shop grew as they started doing custom farm equipment manufacturing for Farmhand and other small manufacturing companies. When his father Leo retired in 1969, they sold their shop to United Farm Tools. Ernie managed the Steinman Division in Carrington until 1989. Ernie was transferred to Oelwein, Iowa, to manage the Speedy Division of United Farm Tools. Ernie worked for United Farm Tools until his retirement in 1991. Ernie was drafted into military service in 1946. After his discharge in 1948, he joined the local National Guard unit. The North Dakota National Guard was activated for the Korean War on January 16, 1951. Ernie is a decorated combat veteran, serving in Korea from July 1951 to August 1952 as the first sergeant of an infantry combat company. He accepted a direct commission to second lieutenant during the reorganization of the North Dakota National Guard in 1953. Ernie retired with the rank of captain in 1987. Upon his return from service in 1953, Ernie joined the Carrington Volunteer Fire Department and served for more than 35 years. The last 27 years he was the Assistant Fire Chief. He was active in the state of North Dakota Firefighter’s Association, serving on the board of directors and as the president in 1971. While in business in Carrington, Ernie was an active member of the local Chamber of Commerce. He served as the president of the chamber in 1979. He also served on the board of directors of the North Dakota Manufacturing Association and was president in 1975. Ernie served for 10 years on the council for the welding department of the North Dakota State School of Science. The Governor of North Dakota appointed him to the State Board of Directors of the Council on Vocational Education in 1976. A life member of the American Legion, VFW, and NRA, Ernie also served as a Catholic Charities board member of the Archdiocese of Dubuque for several years. He made two mission trips to Peru in the late 1990s. He was a 4th Degree member of the Knights of Columbus and a member of Sacred Heart Catholic Church in Oelwein, Iowa. In lieu of flowers, memorials can be made to Wounded Warrior Project in Ernie’s honor. Wake and Prayer Service: 6:00 P.M. Social Gathering, 7:00 P.M. Prayer Service, Friday January 14th, 2022. Boulger Funeral Home, Fargo. Mass of Christian Burial: Visitation 1:00 P.M., Mass 2:00 P.M. Saturday, January 15th, 2022. St. Ann & Joachim Catholic Church, Fargo Interment: Fort Snelling National Cemetery, Minneapolis. Date to be scheduled in conjunction with a Celebration of Life.