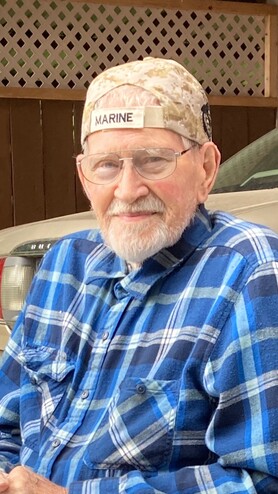 Forest A. Williams was born in North Seattle, to Forest V. Williams Sr. and Alva (Bogle) Williams on January 3, 1930, the oldest of three children. Forest and his family lived in several locations around the Seattle area before moving to Yakima. Forest joined the US Marine Corp in 1947 and was eventually stationed in Korea during the Korean Conflict. While still serving in the military, Forest began a letter-writing correspondence with Katherine Lamb at the encouragement of his sister, Yvonne. After his honorable discharge from the Marines in 1951, they continued to date and were married in March of 1952. Forest and Katherine made their home and raised their family in Alderwood Manor, Washington. To their marriage, four children were born: Lanay, Linda, LeAnn and Larry. Forest was a hard worker and valued a strong work ethic. During his years of employment, he worked at various warehouse and shipping locations including, Montgomery Ward, Sears, Boeing, Air Tec, and finally was employed as a food service delivery person with the Edmonds School district before retiring in 1995. Forest valued family, faith, and keeping busy and productive throughout life. He was incredibly handy and inventive and had a natural skill with woodworking. After retirement, Forest and Katherine spent many happy hours on woodworking crafts and hobby projects. Many of these fine wooden items are now part of the valued collection of family and friends. After a recommitment of his life to God in mid-life. Forest became a strong believer in Jesus Christ as his personal savior. Forest and Katherine served together in church with Vacation Bible school and other programs. Most recently, Forest and Katherine relocated to Fargo, North Dakota to better manage issues of aging. After numerous, recent health issues, Forest was called home to heaven, at the age of 92 on April 19, 2022, only 4 months after the passing of his dear wife, Katherine with whom he was honored to celebrate 69 years of marriage. Forest is survived by his four children, Lanay (Ron) Gard of Edmonds, WA. Linda (Perry) Kallis of Lodi, CA. LeAnn (Steve) Burrell of Fargo, ND, and Larry (Vicky) Williams of Edmonds, WA. He had 16 Grandchildren, and 18 Great Grandchildren. Forest is also survived by two sisters, Yvonne Beatty of Stanwood, WA, and Wanda Still of Springdale, AR. Forest will be remembered fondly by family and friends.