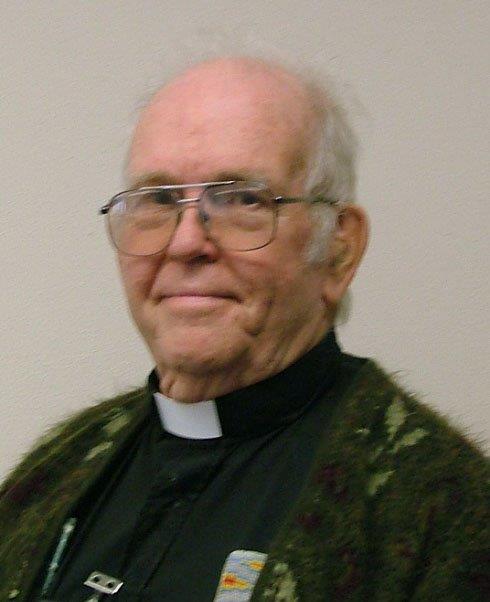 Father Gerald McCarthy of Hankinson died on Nov. 25, 2019, at the age of 90. Father McCarthy was born in Fargo on October 19, 1929. His family lived first in Fargo and then in Miami, Fla. He attended seminary at St. John’s in Collegeville and St. Paul Seminary in St. Paul. He was ordained a priest for the Diocese of Fargo on June 1, 1957. He completed a Master’s degree in social work from St. Louis University in 1969. Father McCarthy served in a number of parishes throughout the Diocese of Fargo including: St. Mary, Grand Forks; St. Maurice, Kindred; St. Agnes, Hunter; St. Catherine, Valley City; St. Paul, Tappen; St. Francis, Steele; Our Lady of the Lake, Lake Williams; St. Anthony, Alcide; St. Ann & St. Benedict, Belcourt; St. John, St. John. Fr. McCarthy served as a chaplain for the Grand Forks Air Force Base, as a director of Catholic Charities, and worked with the Knights of Columbus. He retired from active ministry in 1999. Fr. McCarthy was preceded in death by his parents Cecil and Olive McCarthy of Miami, Fla.; sister Patricia McCarthy Grant of Fargo; and nephew Sredni Vollmer of Arkville, N.Y. He is survived by niece Annie Magnan, Belchertown, Md.; great-nieces and nephews; and many cousins. = Visitation will be 5-7 p.m. with a prayer service at 7:00 p.m., Tuesday, Nov. 26, 2019 at St. Mary’s Cathedral, Fargo. A Mass of Christian burial will be 10:00 a.m. with visitation starting at 9:00 a.m. at the Cathedral. Interment will be at St. John’s Cemetery, St. John, ND, at a later date.