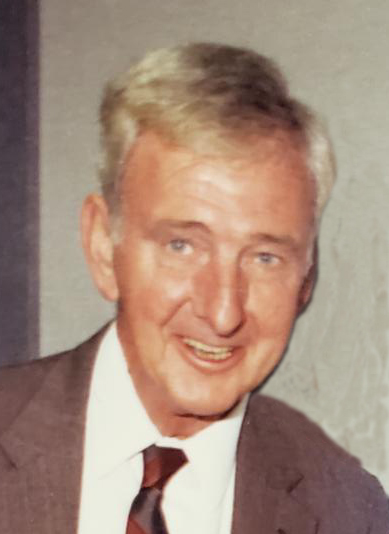 George James Kachel, 90, of Fargo, North Dakota, passed away peacefully, Saturday, June 2, 2018, at his home. George was born May 27, 1928 in LaCrosse, Wisconsin to Clarence and Rose (Roubik) Kachel. He graduated from Aquinas High School, LaCrosse, Wisconsin in 1945 and from Marquette University in 1949 with a degree in Electrical Engineering. On August 26, 1950 he married Carol Ann Bruha in LaCrosse WI. George started his electrical engineering career in systems controls at Honeywell in Minneapolis in 1951. In 1956, George was recruited by the Lockheed Corporation and moved his family to California to work as an electrical engineer. Over the span of his career at Lockheed, he was a senior electrical engineer for the Skunk Works division where he worked on the SR-71 Blackbird and stealth aircraft technology. George retired from Lockheed/Martin in 1989. Throughout his life, George had a great love of aeronautics and technology. He enjoyed building and flying model airplanes. He thoroughly enjoyed listening to music with his very advanced hand built stereo system. He also had a great sense of humor and was always quick with a joke. He was a caring, loving husband and father who cherished his family. George is survived by his wife, Carol, of 67 years. His brother Robert Kachel and his wife Mary (Volz), LaCrosse WI. Daughters Paula (Kachel) Bandy Fargo ND, Pamela (Kachel) Whitney Round Rock TX and daughter-in-law Christina (Peña) Kachel Memphis TN. 6 grandchildren Monica (Bandy) Young, Mark Bandy Jr, James Kachel, Joseph Kachel, Lauren (Whitney) LeBlanc and Colleen (Whitney) Carnagey, 3 great grandchildren and many nieces and nephews. He was preceded in death by his son Peter Robert Kachel.