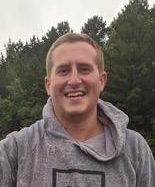 George Justin Nerby passed away on January 19, 2022. He is the beloved son of Ronald T. Nerby and Ione Schultz-Nerby; and brother of Andrew Nerby and Marjorie (Laney) Nerby. George was born February 3, 1989 in Fargo, ND. He was baptized into Christ at Hickson American Lutheran Church, attended Grace Lutheran School, confirmed at Beautiful Savior Lutheran Church and graduated from Fargo South High School. He also attended MSCTC in Moorhead, MN, receiving a scholarship from Bobcat Industries. George showed talent in mechanical and electrical engineering as well as IT systems. George was never happier than when he had grease under his finger nails. He celebrated family and friends with a contagious smile and laughter. He enjoyed the challenge of training and working as Head Referee for area High School Soccer Leagues. George also completed his 3rd Degree Black Belt with pride, he was a student instructor and received awards for competing on regional and national level. During his United States Marine Corp. enlistment, he graduated top of his class at USMC Base Camp LeJeune, North Carolina. Upon returning home and completing his MSCTC degree, George pursued a career in IT management. He completed jobs in business IT support on the international, national, and corporate levels. He was exceedingly proud of the IT team at American Solutions for Business, celebrating their friendship and support. We will continue to love his spirit for life. George is preceded in death by his grandparents, Gilbert and Doris (Windjue) Nerby of Grand Forks, ND. and Herbert and Isabelle (Kuefner) Schultz of Alexandria, MN. Memorials can be forwarded to a nonprofit that George supported, Aussie Rescue of Minnesota, 501(C)(3) nonprofit status; aussierescuemn.org for contact. We thank everyone for the prayers and love our family has received.