Jerry has finished the long goodbye! He slipped his worldly cares for a new home in heaven.

Jer was born on Dec. 14, 1938 in Fargo, ND to Joe and Bertha (Donner) Schutz. His education was in Fargo’s Catholic schools; St. Mary’s, Holy Spirit and Shanley, then on to NDSU to study architecture. He was a Bison fan through and through.

At the ripe old age of 20, Jerry married the love of his life, Mary Fosteson of Fargo and by 1964 they had four sons: Mark, Mike, Tim and Dan. Mary and Jerry always celebrated their first date, which was 66 years ago dancing at the Crystal Ballroom as well as celebrating their marriage of 63 years.

Work was in Jerry’s blood, starting with paper routes, for the Fargo Forum and the Minneapolis Tribune. He delivered 125 Tribs and 90 Forums on Sunday mornings. His love of traveling started with the many trips to Minneapolis that he won hustling Tribune subscriptions. Shoveling snow, cutting grass and weeding gardens for neighbors added to his work ethic and put change in his pockets. While going to college, Jer designed houses and helped build them at Eid-Co. Foss Architects became aware of his talent at drawing perspectives and offered him a job. Twenty Five years later he was a part-owner of Foss Architects and the manager of their Billings office. In 1987 he traded his ownership in Foss Architects for full ownership of the Billings office which he named Schutz Foss Architects. In 1997 he sold his business and retired to the lake cabin near Detroit Lakes, MN. The D.L. Vo Tech needed a teacher for CADD drafting so Jer filled in for a semester, then hired his students to draft for him as he continued his career in Architecture. At 74 he decided not to renew his license and retired to make sawdust; the product was unimportant.

Service to others was also in his blood, starting with being an altar boy. There were many organizations he volunteered his time to including the Jaycees – N.D. state president, N.D. 21st District Republican – Chairman, Boys and Girls Clubs – Board Chairman in Billings and in Detroit Lakes, – St. Anthony’s Football Team – coach for two years, Eagle Mount – Board Chairman in Billings, Breakfast Rotary – President in Detroit Lakes. Besides serving on many boards, he was a fund raiser extraordinaire. “The truth is that it never crossed his mind that if he asked you, you wouldn’t give, and why? Because he spent his whole life giving.” (author unknown).

Jerry had many other interests including travel to all 50 states, all but two Canadian Provinces, 26 countries in Europe, several trips to Mexico, Central America and the Caribbean. He also enjoyed flower gardening; woodworking; painting – mostly landscapes, playing cards – bridge, whist and cribbage, wine and entertaining.

All are welcome to a celebration of life gathering Friday evening in Fargo (6:00 to 8:00 PM at the 400 Building – Powers Hotel) Funeral will be at 10:30 Saturday, June 18th at Holy Rosary Church in Detroit Lakes. Visitation one hour prior at 9:30. Burial will take place at 3 PM Saturday at Holy Cross North Cemetery in Fargo.

We have lost a loving husband, father, mentor, giver and community leader. We carry his inspiration and his love with us. 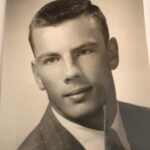