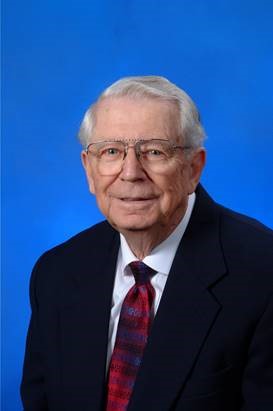 Gordon Olander Grinaker, 99, died peacefully in his sleep at Villa Maria in Fargo on Friday, October 27, 2017. Gordon and his twin sister Ione were born in his grandmother’s farmhouse near Walcott on October 4, 1918. His father Gilbert Toppen was in training for World War I at the time. A few months later, Gordon’s mother Ida (Moen) Toppen died in the great flu epidemic. Following the death of his mother, Gordon was raised by his aunt Bethilda (Toppen) Grinaker and her husband Sophus. Gordon later changed his last name from Toppen to Grinaker. Gordon worked beside Sophus on the family farm along Highway 46. Gordon learned to drive in a Model T Ford and never took a driver’s test. For the rest of his life, he renewed the first ND driver’s license he had bought for a dollar through the mail. Gordon met the love of his life, Georgia Dusek, at a Moorhead dance. They married in 1953, sold their share of the farm and took a year off to travel the U.S. In California they discovered the Autoette, a three-wheeled electric microcar (like golf carts). When the couple returned to Fargo, Gordon opened Grinaker Autoette. Gordon loved to learn new things, and worked at a variety of jobs in Fargo. He worked as a nursing assistant at the Veterans Administration Hospital for a year and did a short stint at the post office delivering mail. After deciding he couldn’t walk that much, he got a job driving truck at Northern Improvement to work on road construction and other projects. In 1960, Gordon rekindled his passion for farming and worked a farm three miles west of Hickson. He and Georgia raised crops, and also four children—two boys and two girls. During the winters of ’65-’67 the family lived in Tucson, AZ, for their son’s respiratory health. Undeterred by his 10th grade education, Gordon took a master’s class at the University of Arizona. County agents from around the world would spend evenings at the Grinakers’ kitchen table, drilling Gordon about how farming theories worked in real life. After Gordon was disabled by severe headaches in 1971, they rented the farmland until his son Dennis could run the farm. In 1991, following Dennis’s death in a plane crash, Gordon and Georgia moved to Fargo. Gordon remained devoutly religious throughout his life. He was a founding member of St. Maurice in Kindred. In his later decades he was a member of Nativity Catholic Church and active in the Fargo Senior Center. Gordon was known for his warm and peaceful nature, and his gift for easy conversation. His curiosity about almost any subject made him an attentive listener and he made everyone feel welcome. Gordon was known for his inventive knack for improving things. His house and car were filled with creative solutions he devised using duct tape and wire. Gordon is survived by his wife, Georgia (Dusek) Grinaker of Fargo; his children Gary (Rhonda) Grinaker of Bismarck, Betty (Bryon) Thom of Edgeley, and Diane (Bill Evans) Gasal of Bellevue, WA; and his grandchildren Krista Thom, Nicole (Brad) Schanche, Ashlee (John) Schaeffer, Tyler Bader, and Grayson Grinaker. He is preceded in death by his parents, his sister Ione (Toppen) Bakko, and his son Dennis Grinaker.