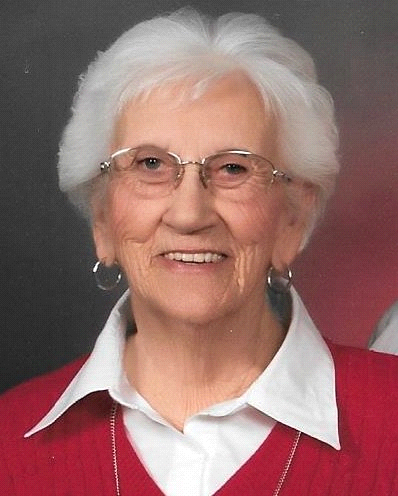 Irene Elizabeth Olmstead, 94 of Fargo ND, passed away Sunday April 26, 2020. She was born to the late Albert and Clara Monson on January 31, 1926. "My job here is to make people smile" spoken by Irene on her first day of moving into Rosewood on Broadway - September 2016. Job well done, Mom, job well done! The youngest of six Monson children, Irene attended the Maps #2 Country School in Nelson Co ND. When enrollment dropped the Maps #2 school was closed, Irene moved to her Grandmother Mauseth's home in Petersburg ND to complete the Eighth grade. Although Grandmother Mauseth spoke only Norwegian and Irene spoke only English, she said "we made it work". Irene moved to Fordville ND, living with her older sister Gladyce Lien and family to complete her high school education, graduating Salutatorian in 1943. Due to the war and shortage of teachers in rural areas, Irene was issued an emergency teacher's certificate after graduating high school and began teaching in a one room country school with 24 students. Continuing her education at Mayville State Teacher's College, Irene moved to Inkster ND for another teaching position earning $140 per month - which also required her to do her own janitorial work. Irene married Patrick Olmstead on December 29, 1948 in Grand Forks ND. They made their home for a short time in Inkster ND, before moving to Antler ND for several years. Eventually they moved to Fargo ND to continue raising their family of four sons, and of course Mom's favorite, a daughter. Patrick was a Fireman for the city of Fargo while Irene worked at Sears Catalog Department for several years. Irene worked as a ward clerk at St Luke's Hospital Emergency Room before becoming a Housemother at Children's Village. She continued working in the field for over 20 years at various groups homes - Frazer Hall, Svee Home with Lutheran Social Services and as a Residential Training Manager at the Home for Unwed Mothers. After retiring from the Fire Dept, Patrick and Irene moved to a small hobby farm by Lake Park MN in 1974. They lived there with their foster son until Patrick passed away in September 1983. Irene and Pat were foster parents over the course of 30+ years and were recognized in 1983 by Becker Co MN as Foster Parents of the year. Returning to Fargo, Irene was a housemother for NDSU Farmer's Union Co-op House for 2 years. She moved to Detroit Lakes MN for 16 years before making her final return to Fargo, ND in 2003. Survivors include her children, Charles (Grietje) Olmstead, Saunderstown RI, Patricia "Trish" Olmstead (Wayne Ramsey) Fargo ND, Timothy Olmstead, Fargo, ND; daughters-in-law Betty Olmstead, West Fargo ND, LaDonna Olmstead, Detroit Lakes, MN; 12 Grandchildren / 12 Great – Grandchildren, foster son, Dale Hoppe Wahpeton ND, honorary daughter, Kaylynn Gibb, Moorhead MN; sisters, Ruth Martinson, Carrington ND, Alice Rohan, Meridian, ID and several nieces and nephews Proceeded in death by her husband Patrick, sons, Daniel and Mark; daughter-in-law, Theresa Olmstead, siblings, Manville Monson, Gladyce Lien, Dora Warner. In lieu of flowers, memorials are preferred to Multiple System Atrophy Coalition, www.multiplesystematrophy.org.