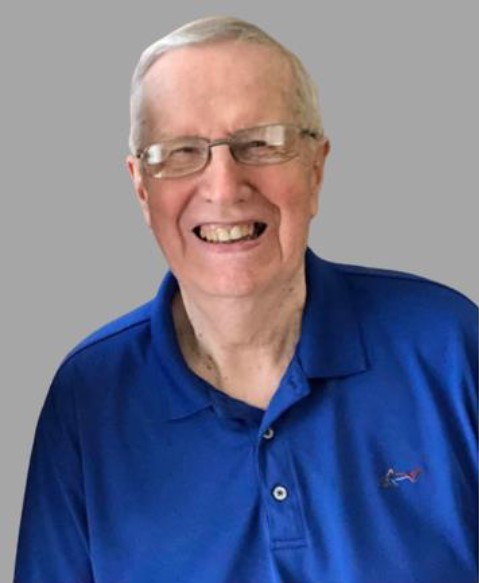 Jim’s Live Streamed Memorial Service can be viewed below starting at 1:30 PM on Friday:

James (Jim) Kroshus of Fargo passed away peacefully on July 2, 2022 after a long battle with acute leukemia. He was an extraordinary role model for his family and a remarkable husband, father, grandfather and great grandfather. He was a very well-respected school administrator, educator and coach.

Jim was born in rural Perley, MN on November 15, 1935. He was the youngest child of Martin and Olga (Wiig) Kroshus. He grew up in the Perley-Borup area and graduated from Borup High School in 1953. He was baptized and confirmed by Bethania Lutheran Church.

After high school, Jim attended Moorhead State College (MSC) for two years and then volunteered for the draft. He entered the Army on April 18, 1956 and spent 18 months of his service time in Japan as an air traffic control tower operator, which he enjoyed. Upon his return, Jim spent two years in the active reserve and returned to MSC where he received his bachelor’s degree in Education. He then received his master’s degree in School Administration from North Dakota State University. Before graduating from MSC, Jim met the love of his life, Beverly Price. They were married on 7/1/60 and just celebrated their 62nd wedding anniversary.

Jim was very active in the community. He was a member of the Davenport Lutheran Church for 38 years and served on the council several times. He was a volunteer summer baseball coach, a volunteer fireman, an independent basketball, baseball and softball player for several years and an active Lions Club member for over 30 years.

Jim was asked to be on the first Cass County Special Education Board. Special Education was a passion of his. He served as Chairman of the Board for the first 14 years when special education services were first established in the county. About this same time, Jim was trained to be a North Central Accreditation Team Chairperson and was part of several teams that evaluated schools in the area. Jim was also Director of the Summer Migrant School Program for 30 years held at either Davenport or Kindred each year. In addition, Jim was the varsity basketball coach at Kindred High School for 12 seasons. During his tenure with Kindred, his Viking teams won eight district titles, numerous Wild Rice Conference titles, and made it to six Region I championship games, taking three of those teams to the State Tournament in Bismarck. His teams at Kindred averaged 19 wins a year.

Jim was a member of several local and State administration groups. Upon his retirement from Kindred Schools in 1997, Jim received the Bell Ringer award, the Golden Apple award and the Service to Children award. He was also among the first inductions in the Kindred School District Hall of Fame.

Jim retired from Kindred Schools in 1997 but he continued to be Director of the Summer Migrant School until the last year of operation in the summer of 2000. Jim went on to do testing/education work for the Department of Public Instruction. During the summer of 2000, Jim was asked to be the first junior/senior High School Principal at Park Christian School in Moorhead, MN. He continued in that position for three years and helped them through their first high school graduation and their first extra-curricular competition. He thoroughly enjoyed his time at Park Christian.

Jim and Bev moved to Fargo in 2002. A short time later they joined Atonement Lutheran Church. Jim continued to be an active member of the Cass County Retired Teachers Association.

Jim was preceded in death by his parents, his four brothers and one sister and their spouses, and one brother killed while in the Service on the Island of Guam and several aunts and uncles.

Memorials may be made to the Salvation Army.

Jim’s video tribute can be viewed below: