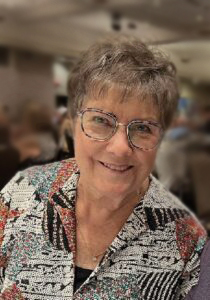 Joan Elizabeth Joyce, of Fargo, N.D., journeyed to her Eternal Home on November 2, 2022, at Sanford Medical Center in Fargo, ND on All Souls Day. Joan was born to Betty and Thomas Corbett of Oklahoma City, OK, on February 28, 1944. She grew up in Oklahoma City and graduated from Northwest Classen High School in 1962.

She entered the University of Oklahoma in September of 1962, and completed her education at Marquette University in Milwaukee, WI. In 1967, she graduated from Marquette with a degree in Dental Hygiene. It was at Marquette that she met a Dental Student from North Dakota, and by January of 1967, she and the love of her life, Michael Joyce, were preparing to graduate and get married later that same year.

Joan and Mike were married at Christ The King Catholic Church in Oklahoma City on September 9, 1967. From Oklahoma City, they moved to Fargo, ND where Mike began his dental practice with Dr. Phil Hagen, and Joan started her career in Dental Hygiene with Dr. Robert Slominski in downtown Fargo. At that time, there were very few hygienists in North Dakota, and Joan helped form the North Dakota Dental Hygienists Association. At their inaugural meeting, Joan was elected the first President of the ND Dental Hygiene Association, a position she held for 2 years.

In 1970, Joan and Mike had their first child, Ann, followed by Michelle in 1972, Patrick in 1974, and Steven in 1977. Early on, Joan immersed herself in the daily activities of a very busy young family. She loved spending time with family and friends, travelling, cooking, baking, volunteering at church, and to the best of her ability, living her life one day at a time.

As the kids grew, Joan returned to her profession as a hygienist, and worked alongside Mike and his associate, Dr. Charles Klemz. Joan was loved by many of her patients, and she took great pride in her work, AKA: counseling and/or gab sessions while cleaning teeth. She retired shortly after becoming a grandmother, which became one of her greatest loves. “Grammy” was so very special to her grandchildren: Grace, Benjamin, Sofia, and Connor (Ann & Jason); Hannah, Andrew, Elizabeth, and Michael (Michelle & Kevin); Brayden, James, and Lauren (Patrick & Tabatha); Jack (Steven & Carrie); and her great grandson, Owen (Grace & Max). She adored them all and took every opportunity to spend time with them, attending many of their activities, whether it was driving them to school, going to a game, attending musicals, plays, and concerts, special tea parties in the Living Room, you name it, she made every effort to share in their joy. She planned a whole family vacation in August to celebrate 55 years of marriage! Memories to last a lifetime were made.

Joan also had a love for shopping… mostly for others. She and Mike also shared a love for “antiquing”, and they furnished their home in Fargo, and their second home in Troy, NY, with many eclectic pieces. She loved sharing her great finds with all of us. She was also never too far from a phone…at Dayton’s or TJMaxx checkout counters before cell phones, then rarely out of reach once she caved and got a cell phone- like the kids. She was the “Queen of Comments” on Instagram and Facebook, never missing an opportunity to share how proud she was of her family, or how great everyone looked, and, most importantly, how much she loved us. We will cherish those comments and conversations forever.

Joan had a motto in life, and that was to live “One Day at a Time”. She lived out her Catholic faith each day by helping others and sharing unconditional love with her husband, children, grandchildren, and dear friends. She was inspirational to her Monday Meeting friends, and they were to her as well. Joan was very active at Holy Spirit Catholic Church, where she used her artistic gifts to beautifully decorate the church for many years. She and her family have been members at Holy Spirit for over 45 years and consider many of their lifelong friends from church part of their family.

Joan learned to face adversity throughout her lifetime, beginning at the age of one, when she was diagnosed with Polio. She accepted challenges and viewed them as opportunities rather than obstacles. At the age of 74, she was diagnosed with a rare form of lung cancer. Joan never gave up hope and was blessed to have been given the best care in the world at The Mayo Clinic in Rochester, MN. She “gave it to God” and was miraculously healed by the Blessed hands of her amazing Oncology Team, including Dr. Levantakos, Dr. Molena, her Research Team, and the many nurses who cared for her throughout her cancer journey. The past few weeks of her life were of concern with the re-emergence of the cancer. They were preparing to climb another mountain, but God had His own plan for Joan. Our family will be forever grateful for the extra time we were given with our beloved wife, mother, sister, grandmother, great grandmother, and friend. God is Good…ALL the time.

Throughout their time in Rochester, Joan and Mike became regular attendees at the local Catholic Church, The Co-Cathedral of St. John the Evangelist. They drew great strength from Fr. Mahon who led them through this spiritual journey. Joan received many special blessings from lifelong priest friends including Fr. Phil, Fr. Pavel, Fr. Jack Davis, Fr. Ross, and ultimately Kevin Capouch who gave Joan her final Blessing. We thank all who kept and continue to keep Joan in their thoughts and prayers, especially her “Prayer Army”, who prayed for Joan day and night.

The special people in Joan’s life know who they are, and while there are simply too many to list, Rita, who was with Joan just before the time of her passing, Betty Lou- her Dancing With the Stars watching partner, Cynthia, Kathy, and Bette- her Il Divo concert groupies, her Al Anon support group, her Mah Jong group, Mavis- her poodle companion, the Dental wives group, Lenny and Jeri- our partners in crime! Sally and Bobbi- her Wednesday Lunch Bunch; Robbie, Judy, Sr. Jeanne, Jay, and so many others that filled Joan’s life with joy and love. These relationships empowered Joan to embark on this wonderful adventure called life and helped her to prepare for her journey Home.