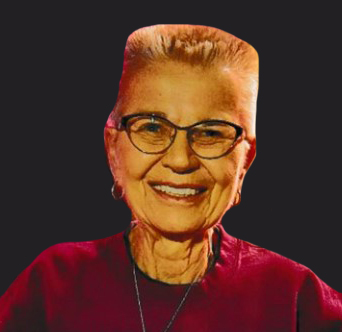 JoNell was born September 17, 1941, to Clayton and Sylvia Larson in Hankinson, ND.

JoNell worked for Northwestern Bell which eventually became Quest Services, for 39 years before her retirement in December of 2001. After retirement, JoNell spent an additional 10 years at Fleet Farm as a cashier. The day cashier on till 18, always Jo’s till, was well known for her willingness to have a conversation and her outgoing disposition. JoNell retired from Fleet Farm to assist in the care of her daughter Jill, whom she lovingly called, “Putz”, until Jill’s untimely passing in 2019.

JoNell enjoyed going to weekly burger and taco nights at the VFW with good friends. She would never say no to a good cup of coffee and some good conversation. You always knew the coffee pot was on at Jo’s. Her biggest passion was playing a good game of BINGO! She always seemed to have that lucky dauber in the corner when she played as well.

JoNell was also known every Christmas for those famous caramels! It was practically a holiday itself to make caramels at the Murack house. She loved sending those to family and friends and put on many miles hand delivering an incredible number of batches over the years.

The biggest love of her life, however, was her grandson Tristen. Grandma Jo and Tristen made cutout sugar cookies for every holiday, from the time Tristen could kneel in the chair and assist. They also loved getting on the floor and playing with Grampa Clarences’ horses, and the school bus and dump truck, playing 6,5,4 and playing 31.

JoNell is survived by her son John (Laurie) of Fargo. The light of her life her grandson Tristen. Her brothers Norvel (Barb) Larson, Arizona, and Van (Debbie) Larson, Bismarck, ND. As well, as several nieces and nephews and great nieces and nephews.

She is also survived by several members of the Murack family clan.

Private interment ceremony will be held at a later date.