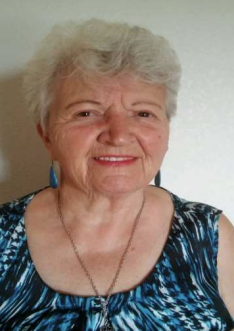 Kenegunda “Keney” was born in Emmons County, Linton ND, to Mathias and Kenegunda (Vetter) Wolf on January 24, 1936. In 1945, the family moved to Napoleon, ND, and 1949-1953 to Bismarck, ND. Keney attended country school until they moved to Bismarck, where she attended St. Mary’s Grade and High School. In 1955, she then graduated from Napoleon High School.

Keney worked as a waitress and later as a receiving clerk for GNC/Golden Harvest for 23 years. Keney was a charter member of the AMVETS Post 7 Auxiliary in Fargo, ND. After retiring, Keney and Donald moved to Mesa, AZ in 1996. She was an active volunteer in several areas in her retirement community.