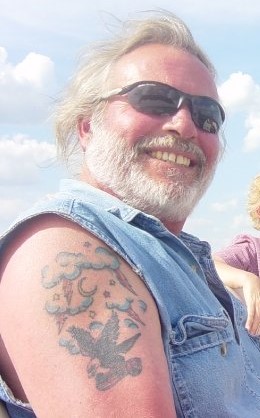 Kenneth's service will be livestreamed below at 10:00 AM Friday, April 8, 2022. Ken Christopher threw his watch to the ground and rode “Big Red” – his 1977 Harley Davidson Electra-guide, full dresser with original paint – into heaven on Monday, April 4, 2022. Known for his larger-than-life personality, handsome face and gap-toothed smile, he leaves our hearts grieving, and yet full of warm memories. To Ken, anything could be turned into a joke. Even in the darkest moments, the laughs were within reach and only a perfectly phrased one-liner away. He was so loved. Ken was born on November 29, 1950 in Grand Forks, ND to Wendell and Bertha Christopher, and grew up on a farm in Breckenridge, MN. He learned how to fix machinery from his father, and would surely like you to know that he picked a lot of rocks out of the fields when he was a kid. And caused a lot of trouble for those city slicker kids, with the help of his 10 brothers and sisters. In 1969, with the Vietnam draft having already called several of his brothers, Ken joined the Air National Guard. He trained at Lackland Airforce Base, and then honorably served over the next 6 years as a jet mechanic. He began his civilian mechanical career at a Jaguar shop in Minneapolis. Following this, he moved to Fargo and worked at Edgewood and El Zagal golf courses, fixing the maintenance equipment before gradually moving up to Golf Course Superintendent. He then moved on to supervising the maintenance at Prairiewood and Rosecreek Golf Courses as well as the city’s southside parks. Ken was only 19 when he met the love of his life, a 17-year-old, pretty little tomboy named Margie. They’d been together ever since, taking care of each other, and helping each other accomplish their dreams. Ken loved motorcycles and spent hours fixing and adding chrome to “Big Red,” after which he won bike show competitions in both Fargo and Sturgis, SD. He helped Margie fulfill her dream of buying a horse, and happily slung hay and taxied cold beverages to Margie while she rode horseback on hot days. In the tender moments of his life, he would always speak about how much he loved Margie. He prided himself on his mechanical abilities, and freely offered his services to anyone that needed them. He was the kind of guy that stopped and helped people on the side of the road – whether that was helping to fix a broken down car or motorcycle, or pulling them out of a snowy ditch. He’d drop everything to lend a hand when asked. He was always ready to sweep in and rescue whomever needed rescuing. Sometimes it was his children, and they are forever grateful to him for it. He loved his family, grilling steak and hamburgers in every season (all the while handing you “tasters” of meat while it was cooking) and hanging out in the garage listening to outlaw country. His favorite movie was Easy Rider and he’d joke that it was based on his life. His latest passion was tinkering with his 1959 Cushman Eagle, which he’d recently entered into the FM Crusaders bike show with the help of his wife, family and friends. Ken helped found Fargo’s chapter of the Harley Owners Group (HOG) in 1986. Later, Ken and several friends began an annual motorcycle run that benefited the Muscular Dystrophy Association. He was his happiest after a good ride. He loved talking to people, counseling people, and letting them know to “not worry about the small stuff.” He enjoyed playing his guitar and singing “Seven Spanish Angels” to his daughter and wasn’t afraid of breaking out the dance moves. He passed down his love of motorcycles to his son, and would even board an airplane with a bag full of tools to work on his son’s motorcycle or car. He has left behind his loving wife, Margie, son Chad (Erin) Christopher and daughter Rebecca (Jake) Wirtzfeld and much adored grandchildren Lulu, Anika, Valrik, Neala and Joey. He’s left his good friend and father-in-law, Gene Pfaff, as well as many other much loved family and friends. We have lost a true samaritan. He is also survived by siblings Marlys (Rodger) Haugen, Ron (Laura) Christopher, Don Christopher, Tim (Bev) Christopher, Barbara Christopher, David Christopher, Richard (Cheryl) Christopher and Greg Christopher. He was preceded in death by his parents and brothers Ray (Josie) Christopher and Dennis (Diane) Christopher, as well as his mother-in-law Sheila (Gene) Pfaff.