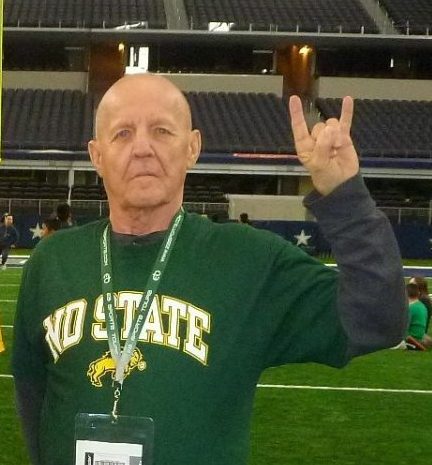 Larry’s service will be livestreamed bekow starting a half hour prior to service at 2:00 PM Friday, May 20, 2022.

Larry grew up on a farm just outside of the town of Elgin, ND, where he attended and graduated from Elgin High School in May 1963. Larry furthered his education at Bismarck Junior College (1965) and earned a degree in Distributive Education from the University of North Dakota, Grand Forks, ND in May 1969.

Bonita R. Redman joined him in marriage on June 9th, 1967, Hope Congregational Church, Elgin, ND and this union would bless him with two sons.

Throughout the years his career path would take Larry and his family too many new places to live and work. He taught DE and General Business at Bismarck High School before starting with the Kmart Corporation in 1971. He held positions of assistant manager, co-manager, and store manager for stores in Sioux city, IA; Columbia and Jefferson City, MO; Hasting, NE; Olathe and Overland Park, KS; Kewanee, IL; St. Cloud, MN; Aberdeen SD; and Durango, CO. Larry resigned from his retail career in 1986 and headed back home to North Dakota. From a vocational teacher in Oakes, ND, job developer with Pride Industries, buyer for Medcenter One, department manager at Walmart, and expeditor for a contractor in the Bobcat Company; these local jobs occupied his time until Larry decided to be closer to his grandchildren and moved to West Fargo, ND in 2014. He would briefly work for Coca-Cola before retiring.

Not one to let moss grow under his feet; daily walks, eating out with family and friends, recording in his daily weather journal, chatting up and voicing his opinions with anyone that would kindly listen, kept him busy. In his free time Larry enjoyed hunting (younger years), gardening, and working on woodworking and craft projects. He could often be found in the stands at local Redhawks baseball, NDSU basketball or UND football games. He delighted in attending numerous NDSU football games with son, Pat. Going to Frisco, TX, a few times for the National Championship games was a big highlight. Firing off a few rounds at the shooting range with son, Cam, was also a special treat. Larry took great pride in volunteering his time with various organizations and events in the Bismarck and Fargo area. He would give many extra hours to ND Assistive Technology and the VA Hospital and he was extremely proud of hitting a personal goal of over 2,000+ hours of service with the VA in 2021.

Larry was extremely boastful of his grandchildren. He dearly treasured and cherished his time that he spent with each of them. Spencer and Grampie had a very close, special bond of their own. They both looked forward to their weekly visits with each other often filled with laughter and lots of mischief.

To some Larry could come off as a not-so-patient, grumpy, stubborn, pig-headed man, yet behind that gruffness, he had a generous, loyal, caring, compassionate and empathetic heart. He was always ready and willing to help out or volunteer his time or services when needed and he will be deeply missed by all who truly knew him.

Larry is preceded in death by his parents; brothers; Ervin, Eugene, Bernard, Marvin, Delmar, and Gerald. His loving wife Bonita Roth joined him in heaven on December 13th, 2021, followed by his grandson, Mason Roth on December 16th, 2021.

Memories of him and his antics will forever be remembered by those that survived him; his son Patrick (Barbara) of West Fargo, ND, son Cameron Roth of Fargo, ND; three grandchildren – Spencer, Isabel and Colby Roth; brother Norman (Audrey) of Mandan, ND, sisters – Esther Maas of Renton, WA, Violette (Lawrence) Ketterling of Livingston, Texas, and LaRue Roth of Horseshoe Bay, Texas; and many beloved nieces, nephews, and extended family.

Visitation will be from 1-2 p.m. followed by a memorial service at 2 p.m., Friday, May 20, 2022 at Boulger Funeral Home in Fargo, ND. Burial will take place at Sunset Memorial Gardens in Fargo, ND in the Garden of Devotion area. Arrangements made by Boulger Funeral home.