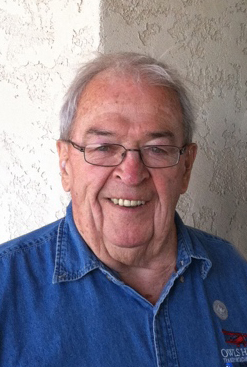 Judge Lawrence A. “Larry” Leclerc, Jr., died on Sunday, October 4, 2015, at Sanford Palliative Care unit in Fargo. Larry was born in Fargo on October 16, 1934, the oldest of five children of Lawrence A. Leclerc and Clara Hoss. He graduated from Shanley High School in Fargo in 1952, attended St. John’s University in Collegeville, Minnesota, for one year, and worked as a fingerprint technician for the Federal Bureau of Investigation in Washington, D.C., before being drafted into the U.S. Army in 1954. In the Army, he served as a cannoneer and criminal investigator. After the service Larry completed his undergraduate education at the University of North Dakota and went on to obtain his law degree from UND in 1966. Following law school, Larry joined the Serkland Law Firm in Fargo. His practice primarily involved real estate and property law. In 1979, Governor Arthur Link appointed Larry a district court judge. He won election to a full six-year term in 1980, and was re-elected in 1986, 1992 and 1998. He retired from the bench in 2004. On December 27, 1958, Larry married Kathryn “Kay” Dahl of Chaffee, North Dakota. Larry loved automobiles, and knew everything about them -- especially MG’s. In retirement, he derived great satisfaction from taking his painstakingly restored 1946 MG TC to car shows, at several of which he won awards. He was also a regular attendee at the Friday lunch and Saturday morning breakfast gatherings of the British Iron Society (its members are devoted to all makes and models of British cars) at the Fryn’ Pan restaurant. Larry is survived by his daughters, Martha Kathryn Leclerc (Leo Wilking), Fargo, ND, Joan Leclerc Vartanian (Harout Vartanian), Los Angeles, CA, and Rebecca Mary Leclerc, Edina, MN; by his son, Jeffrey Lawrence Leclerc (Cindy), Apple Valley, MN; two brothers, Bernard (Roberta) and Daniel (Beverley); two sisters, Judy Ertsgaard (Denny) and Jane Bietz (Doug); two granddaughters (Eleanor and Virginia Wilking), four grandsons (Steven Leclerc, Eliot Wilking, Aram Vartanian, and Jake Seiler) and many cousins, nephews and nieces. He was preceded in death by his parents, and by his wife Kay, who died in 2012. Funeral services will be held on Friday October 9, 2015 at 1:00 pm at Nativity Catholic Church Fargo, North Dakota. Visitation will be one hour prior to service. Interment to be held at Holy Cross Cemetery (North). Memorials preferred to Roger Maris Cancer Center.