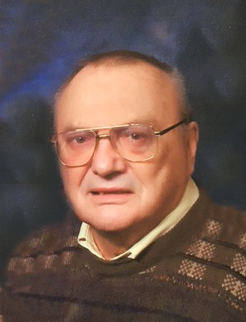 Leonard George Bachmeier, 83, Fargo, ND passed away August 23, 2017 at Sanford Medical Center with his loving family by his side. Leonard was born to Daniel and Theresia Bachmeier February 18, 1934 at the family farm near Esmond ND. He attended Rich Valley School and graduated from St. Mary’s high school in Devil’s Lake. Leonard felt fortunate to be the first of his family to graduate from a four year college and graduated from Mayville State in 1956 with a degree in Education. Leonard was in coaching and education for over 20 years with stops in Churches Ferry, Tolna, Carrington, Glen Ullin, Esmond, and Lakota, ND. Among his most meaningful accomplishments were starting and building baseball and track programs in several of those communities. Leonard had a lifelong love of sports and a determined spirit that helped him succeed as both a player, and coach. He lettered in 4 sports in college, was a member of the 1957 Mayville Red Caps Amateur Baseball championship team, being named an All-Star, and compiled an impressive coaching record over his career. Leonard was also an avid sports fan with undying loyalty to the Notre Dame Fighting Irish, Boston Celtics, Cleveland Indians, Atlanta Braves and Green Bay Packers. There were many special sports moments in Leonard’s life but one of the most special was to have his son Dan follow in his footsteps and be there when Dan’s High School Girls basketball team went undefeated and won what would be the first of two Missouri State Girls Basketball Championships. Leonard cherished his family and spending time with his children as they were growing and learning meant everything to him. He was so proud of them and of his 3 wonderful grandchildren. His wife Jane, children, grandchildren and special family members and friends loved him dearly and will miss him. Leonard is survived by his wife and companion of 34 years Jane (Voss); three children, Daniel (Linda) Bachmeier, Harrisburg MO; Leigh Ann Bachmeier, Wenatchee,WA; and Michele Rae Bachmeier, Albany CA; three grandchildren, Carl Jacobs, Missoula, MT and Anna and Soren Fleming, Wenatchee WA; three brothers Jack Bachmeier, Grand Forks ND, Joe Bachmeier, Irvine CA, Marvin (Diane) Bachmeier, Plymouth MN; four sisters Julia Aschburger, Richfield MN, Helen Zarr, Devils Lake ND, Philomena Aylesworth, Eau Claire WI, Ann (Ray) Larson, Bismarck ND; several sister and brothers-in-law, and many nieces and nephews. He was preceded in death by his parents, his first wife Bernice (Winger) Bachmeier, brothers John Bachmeier, Walter Bachmeier, and Albert Bachmeier; and sisters Mary Pfau, Irene Buchner, and Catherine Bachmeier.