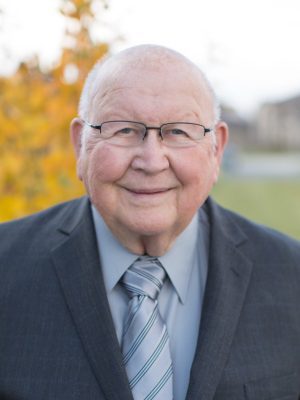 Prayer Service: Linden Dale Churchill, age 87, of Fargo, North Dakota went to his heavenly home on April 22, 2022. He passed away peacefully at Sanford Medical Center in Fargo alongside his family and pastor. The family sent him to heaven singing Amazing Grace. Linden was born on March 18, 1935, in Traverse County, Minnesota to Oscar Leland and Anna Wilhelmina (Zimmerman) Churchill. He was a baptized member of the Eden Reformed Church in Herman, attended country school in rural Traverse County, and Herman High School in Herman, Minnesota, graduating in 1955. Linden enlisted in the United States Army Reserve in 1957 at Fort Leonard Wood Military Base in Missouri for basic training and was discharged in 1963. On June 21, 1958, Linden married the love of his life, Karene Rose Henrichs of Morris, Minnesota at Peace Lutheran Church in Morris. The couple made their home in Herman from 1958 to 2012. Linden and Karene were active members of Bethel Lutheran Church in Herman and participated on the church board and in the choir. Linden farmed with his dad in rural Traverse County until 1959 and then worked at Herman Market Company from 1959 to 1970. Linden joined GTA Feeds and received several sales awards for his exceptional performance. After his career with GTA Feeds, he worked for Blume Equipment for a year and returned to farming in 1982 until he later retired. Linden also worked for Backman Seeds and covered many miles as a beet truck driver for Blume Farms of Herman. Linden served the Herman Community as a member of the Herman Fire Department from 1966 to 1988, City Council from 1972 to 1983, and City Mayor from 1984 to 2012. Linden was a member of the Masonic Lodge in Wheaton, Minnesota since 1956, American Legion Post 378 in Herman, and Eastern Star in Morris. Linden and Karene received the Herman Odd Fellows Hall of Fame award in 1999. Linden and Karene were long time supporters of Grant Count 4-H. They supported their three girls with countless 4-H projects, served as Progressive 4-H Club leaders, and later managed the 4-H Food Stand for more than 20 years. Linden had numerous hobbies and loved the arts. In high school he played football for the Herman High School Panthers and participated in speech. He sang with the Men’s Choir in Morris, Alphean Male Chorus in Wahpeton, North Dakota, Bethel Lutheran Church in Herman, Hope Lutheran Church in Fargo, and the Touchmark Retirement Home’s choir. Linden put his comedic ways to wonderful use as a member of plays in high school, 4-H, Herman Community Theater, and Prairie Wind Players in Barrett, Minnesota. He served as one of Santa’s elves dressing up as Santa Claus each Christmas. Throughout his life he enjoyed raising an amazing vegetable and flower garden and could raise the most beautiful roses. Red was his all-time favorite. Following their retirement, Linden and Karene moved to West Fargo, North Dakota in 2012 to be closer to their family. In 2021, they transitioned to Touchmark Retirement Living in Fargo. Lindy was a “tell it like it is” kind of guy who was tenacious and coupled that with a quick wit and laugh. He was a family guy – in the sense that if you were a friend, you were also family. People experienced his love, caring, compassion, and even protectiveness for those that he loved. He also prioritized family – if there was an event for one of the kids, grandchildren, and great grandchildren, he was there cheering them on. Linden was appreciated for the many ways he taught us how to slow down and appreciate life. Linden celebrated his 87th birthday in March, celebrated Easter with the family, and showed such a determination to live life to the fullest until the end. He is an example for how to manage something like Parkinson’s with dignity and not let it be a limitation. Linden was preceded in death by his parents; brother, Kenneth Lowell Churchill; Grandparents, Jerry Logan and Orpha (Heller) Churchill and Herman Franz and Minnie H. (Boots) Zimmerman. He is survived by his loving wife, Karene, of Fargo; daughters, Karen (Rod) Engel of Pelican Rapids, Minnesota, Kayla (Brian) Werk of Fargo, Kathi (Greg) Salvevold of Moorhead, Minnesota; grandchildren & great grandchildren: Shari Olson (Jacob, Aiden, Grace & Fynn), Katherine & Ryan Smith (Jean), Austin (fiancée Jordan Pris) Engel, Erik Engel; Alexander & Bailey Werk, Aubrie Werk, Andre Werk; Addison Salvevold, Cole Salvevold, Easton Salvevold and many extended family members.