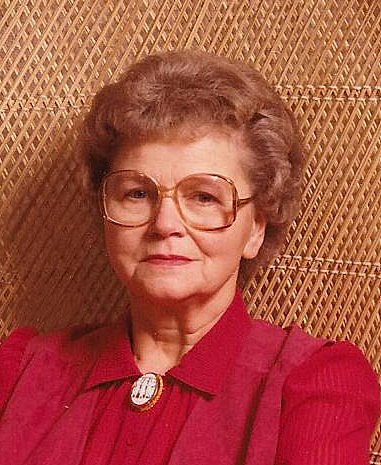 LuVerne Ella (Hagen) Hutchison, age 94, Hillsboro, ND, died on March 9, 2015, at Hatton Prairie Village. LuVerne was born on April 6, 1920, to Gena and Einar Hagen in Barrie Township near Walcott, ND. She attended the Barrie Township School and later worked in Fargo. She met Richard Hutchison, and they married June 21, 1944, in Moorhead, MN, and they enjoyed 64 years as husband and wife. LuVerne and Richard lived on the Hutchison family farm near Caledonia until they retired and moved to Hillsboro. Later they lived at Tufte Manor Assisted Living in Grand Forks until LuVerne moved to Hatton Prairie Village where she has been since 2008. LuVerne worked as wife and mother on a daily basis, and she worked for many years as a CNA at the Hillsboro Community Hospital where she was known as a very caring care giver. She was a member of the Hillsboro United Parish where she was active in the women’s society (WSCS). Each year she looked forward to the annual Church Bazaar where her quilts, and crocheted afghans and doilies were always very popular items. She also enjoyed baking holiday specialties….almost as much as everyone enjoyed eating them. LuVerne was mother to three sons: John (Lonny) Hutchison, Northwood; Bill Hutchison, Grand Forks, and Neil Hutchison, Bismarck. She was grandmother to Bryan (Melissa) Hutchison, Eden Prairie, MN; and Daniel (Adrienne) Hutchison, Colorado Springs, CO. And, she was Great-grandmother to Cade, Nora, and Elin Hutchison, in Eden Prairie; and Bailey and Nash Hutchison in Colorado Springs. LuVerne was preceded in death by her husband, Richard, her parents, a sister, Myrtle Larkin; and six brothers: Thomas, Elder, Gordon, Arthur, Grover, and Frank. She is survived by her sons and their families and one sister-in-law Evy Hagen of Hopkins, MN, and by many nieces and nephews.