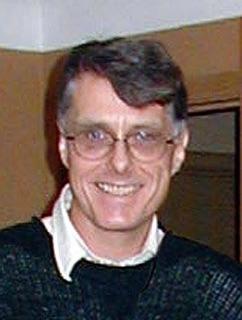 Mark Harland Johnson, 63 died unexpectedly at his home in Fargo July 22, 2018. Born October 13, 1954 in Rochester, Minnesota, he was the son of Syrus and Hazel (Hultquist) Johnson and the former husband of Jane Alexander of Dracut Massachusetts. Mark spent his childhood in Winona, Minnesota. When he was 14, they moved to Clermont, Florida. He attended Clermont High School and was known as "Flick" for his photography skills. His first jobs were at Disney World, where he manned a popcorn cart and then piloted the boat on Disney's lakes. An artist from an early age, Mark studied art and film at Florida Technological College and graduated in 1977. He worked as a graphic artist in Orlando and received an Addy Award for his work at Florida Public Broadcasting. In 1980 his mother had a debilitating stroke and he cared for her tenderly until her death in 1985. During this time, his lifelong passion for trains found its way into paintings, beginning with trains of the 1940's in historic Florida landscapes. He developed a photorealistic style that defined him as an artist and drew the attention of national rail enthusiasts. In 1985, Mark moved to Harper’s Ferry, West Virginia to paint the Baltimore and Ohio train. His painting, Thunder Over the Potomac, led to prints that are still among the best loved rail scenes of that area. He later moved to Baltimore to paint several commissioned works. Mark relocated to Boston in 1989 where his progressive politics led to work at Green Peace. He settled in Jamaica Plain, MA in 1981. For many years, he was the volunteer coordinator at the Museum of Fine Arts in Boston. He continued to free lance and to paint historic railscapes. Several paintings were used as illustrations in books: Ghost Train and The Royal Blue. His most ambitious work, The Century won the 2001 staff artists award at the Museum of Fine Arts. In 2004 he married Jane Alexander. They moved in 2007 to New Orleans to be part of the post-Katrina rebuilding efforts. He worked as a millwork specialist at Home Depot and continued painting. They moved to Moorhead, Minnesota in 2010 for Jane’s work as Executive Director of Churches United for the Homeless. He was employed at Home Depot in Fargo and enjoyed working on their house and walking their black lab, Harriet. They divorced in 2016 when Jane returned to Massachusetts. They remained best friends until his death. Mark loved traveling by train and rode every rail line in the lower 48 states. He was passionate about movies and had 100 top favorites. Deeply interested in American history, he was always reading to understand how we had gotten here. He enjoyed NASCAR, Big Band music, jazz, and biking. A great baker, he made treats for his friends from his mother's Swedish recipes. He adored his black cat Millie, rescued as a kitten from a wood pile at the New Orleans Home Depot. Selfless, kind, and non-judgmental, he was beloved by the friends he made wherever he went. His capacity for empathy was boundless and in his quiet, gentle way he reached many who felt alone. He was a caring uncle to several adopted nieces. Mark struggled with illness, beginning with diabetes in his young adulthood, and later with depression that led to addiction. He was deeply grateful for the support he received from the recovery community in Fargo-Moorhead. Mark is survived by his sister, Joann Johnson, of Winona; niece, Kristin Horman of Duluth; nephew, Brian Horman of Kansas City; many cousins and aunts in Minneapolis; his former wife, Jane Alexander; his former sister-in-law, Sarah Alexander; and his former brother and sister-in-law Andy Alexander and Linda Kruckenberg, who all loved him dearly and will miss him very much. A memorial service will be held Friday, August 3 at 1:30 PM at the Spirit Room, 111 Broadway in Fargo. A second memorial service is being planned in Boston in the coming months and information about that will follow when it is available. Gifts in Mark's memory may be given to Refuge Recovery of Fargo and the American Diabetes Association.