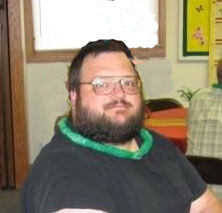 Mark was born May 7th, 1963, to Tony and Lu Jasinski. In Fargo ND. He lived in Fargo all his life. Mark was never married. He enjoyed being single and living alone.

Mark worked at Paradiso in Fargo for many years. He was a prep cook, washed dishes and made thousands of baskets of chips. The Paradiso employees were his second family, they also gave him his famous nickname, Schmoo, which everyone continued to call him. He also worked at Sheyenne appliance in West Fargo (he was called Jay there), doing what he loved to do, tearing apart appliances.

Everyone that knew Mark said that he knew a lot of useless information that most people didn’t pay much attention to. So, it was always interesting to have a conversation with him or watch jeopardy with him. Having a conversation with him was always fun and interesting. When Mark wasn’t reading, he was playing strategic games on the computer. As an elementary student he was also a member of the of the Boy Scouts of America.

Mark is preceded in death by his parents Tony and Lu and brother Kevin.
Blessed be his memory

A memorial service will be held at 1:00 on Sunday September 11th at Vernes Lutheran Church, rural McIntosh, MN.