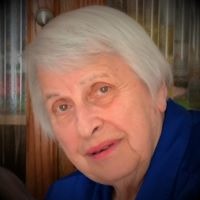 Marlys (Geerdes) Grindberg left this earthly realm May 17, 2022, with her daughters at her side.

Amaryllis Grace Geerdes was born to William and Martha Geerdes May 4, 1931, at the family home in Davenport, N.D. She was the youngest of 6 children and affectionately known as “Babe” by many in the Geerdes tribe.

She married the love of her life, Carl Grindberg, in 1950. They lived in Davenport, N.D. for 64 years until Carl passed away in 2015. Both Marlys and Carl were considered role-models by family and friends far and wide because of their generosity, faith, and their commitment to their family and community. Marlys continued to live in her Davenport home until March of this year when she went to Sheyenne Crossings Care Center for transitional care. Her hope was to return to her beloved community home, but it was not meant to be.

Her entire life was spent as a caretaker for friends and family, young and old. She was strong-willed and kind-hearted. She was constantly helping uplift those around her. She was a woman of great faith and lived it daily – she was affectionately known as “The Prayer Warrior”.

She was the unofficial “Welcome Wagon” for the City of Davenport. Through the years, Marlys baked thousands of cookies and fresh-baked goods to share in all types of important life events for those in the community. Her funeral food was known far and wide. Anyone that stopped by her house knew they wouldn’t leave without getting a cup of coffee and a home-baked treat.

Marlys loved being a member of the ‘Dummy Rummy Club’, where she would play for quarters and share copious amounts of snacks with her friends.

Marlys took great pride in her flowers and her garden. Her favorite spot was sitting at the kitchen table watching the flowers bloom and the birds at the feeders.

The biggest joy in life was her family. Marlys was a true matriarch and the glue that held it all together. Our fondest memories will be of our family gathered around the kitchen table, where stories were told and memories were made.

Marlys is survived by her two daughters, Val (Del) Bernstein and Marty (Mike) Schmit, both of Davenport; her grandchildren, Wade Bernstein of Billings, MT and Joey (Emma) Schmit of Fargo, ND; and her great grandchildren, Preston and Adilyn Bernstein, and Tilda and Rowan Schmit.

She was preceded in death by her husband, Carl; parents; 3 brothers (Ken, Jim and Bill Geerdes) and 2 sisters (Eileen Conway-Best and Marcy Wilson), and granddaughter Molly Bernstein.

FUNERAL SERVICE: 10:30 AM Saturday, May 28, 2022, at Davenport Lutheran Church – with a visitation one hour prior – All are welcome to attend this service, for those unable, it will be livestreamed on the funeral home website.
BURIAL: Davenport Cemetery

Arrangements have been entrusted to the care of Fredrikson- Boulger Funeral Chapel in Kindred, ND. To sign the online guest book, please visit our website at www.boulgerfuneralhome.com