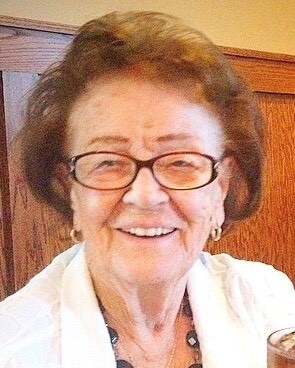 Betty Cannon passed away peacefully in her sleep on June 17th, 2019. Betty was born August 19, 1924 in Kenmare, North Dakota the fifth and final child of Karl and Agathe Steiner. Karl and Agathe were homesteaders from southern Germany, arriving in 1905 following their wedding in Germany. Betty grew up on the family farm and attended St. Agnes Elementary School in Kenmare and graduated from Kenmare High School in 1942 with honors. Betty met Everett Cannon, the love of her life, in Rock Lake, North Dakota. Everett was on leave from the navy and saw a photograph of her in a store showing pictures of graduates and told a friend he wanted to ask her to a dance. It’s a small town and Betty was informed, so she went down to another store that had photos of local men in the service and liked what she saw. When he could dance that cemented the relationship. Betty and Everett were married on June 3, 1944. They lived in several places trying to find themselves in post war upper Midwest including Olathe, KS and Devils Lake, ND before finally settling in Mandan, ND. Everett had gone to barber school by this time using the GI bill. They lived and worked in Mandan, Everett at the Deluxe Barbershop he owned and Betty as a legal secretary, from 1950 until 1967. They then moved to Fargo, ND where Everett taught at the Moler Barber College. This would become their lives’ work when they purchased the barber college and building it utilized in downtown Fargo. While handling the financial side of the barber college, Betty worked at Western States Life for over 20 years and remained close in later years with many of her co-workers. Betty loved singing and dancing. Everybody knew her computer password was “dancing”. She joined and was a part of Sweet Adelines for many years, singing in a quartet and group. She and Everett spent many a weekend at the Elks Club in Mandan and Fargo dancing and having fun with their many friends. Betty and Everett loved Minnesota lake living, owning cabins or homes on Rush Lake, Lake Ida and later Big Cormorant Lake. Their children, grandchildren and great-grandchildren came to love lake living, boating and water sports through family reunions (always held at whichever lake) and visits with Betty and Everett. Betty was preceded in death by her sisters Agnes Mortell and Clara Karls, brothers Carl Steiner and Albert Steiner, grandsons Michael Cannon and Garth Cannon, and granddaughter Brandi Parr. Her husband Everett passed away in December of 1997, and Betty is still mad at him for leaving her alone. Betty leaves five children; Darr (Susan) Cannon, Clair Ross Cannon, Keith (Linda) Cannon, Jill (Steve) Garrison and Joel Cannon. She also leaves many grandchildren and great-grandchildren spread out over the U.S. in Texas, Washington, Florida, Minnesota and North Dakota. Funeral services will be held at 1:00 pm on July 13, 2019 at Holy Spirit Catholic Church, 1420 7th Street North, in Fargo. Interment will occur at Fort Snelling in Minneapolis next to her husband Everett.