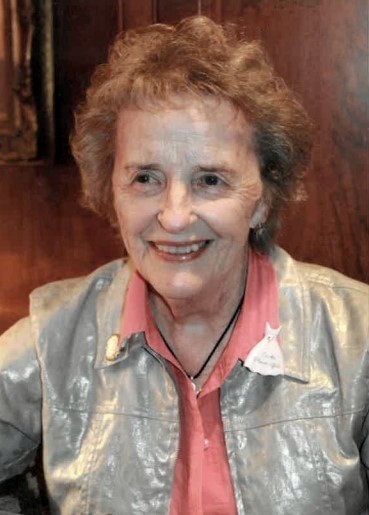 Mary's Funeral Mass can be viewed below: Mary's Live Streamed Prayer Service can be viewed below: Mary Teresa (Kelly) Noah, 94-year-old mother, grandmother, great grandmother, role model and wonderful inspiration passed away at her home in Fargo, North Dakota on Tuesday, February 22, 2022. Mary Teresa Kelly was born on February 4, 1928, the eve of the Great Depression, to William and Loretta Kelly. Mary was the seventh of nine children predominately raised in East Grand Forks, Minnesota, by her mother after Mary’s father unexpectedly died when she was four years old. Though from a humble background, Mary’s mother insisted that her children attend Sacred Heart School, attend daily Mass, and she would end each day tucking her children in and saying ‘Good night and God bless you.’ Mary’s childhood was a fun but challenging time. Her mother always made sure there was food on the table and proved to be resourceful during those trying times, but it was a true sacrifice and testament to her faith that all of her children, including Mary, received twelve years of Catholic education. Great times were had by Mary when visiting her Aunt Gertrude’s (Gerty’s) farm with extended family, riding the manure dump truck, riding on small pigs, and singing with hired hands on the steps of the bunkhouse. After graduating from high school, Mary went to business college and took several courses at the University of North Dakota. She then ventured out East, living in New Jersey and working in New York City for a year, which allowed her to attend several Broadway shows – instilling in her a lifelong passion for singing and dancing every day of her life. She returned home and worked several jobs prior to attending St. Mary’s College in Indiana, where she explored the possibility of becoming a nun and committing herself to a religious life. After her time in Indiana, Mary moved to Minneapolis, MN where she was employed prior to returning home to East Grand Forks. Mary met the love of her life, John Noah, at a hockey game in March of 1951. They married in 1956 and started a family in Grand Forks before moving to Fargo, ND where they raised their eight children. Service was a large part of their lives and Mary and John were participants and founding members of numerous Catholic and Christian organizations and staunch supporters of all pro-life causes. During her lifetime Mary enjoyed many wonderful friendships, particularly those with other mothers and parents who shared her adventures of raising a large family. She had a great sense of humor and was patient and kind (and always very Irish!). Although Mary contributed greatly to her community, the focus of her life was always her faith and her family. She had great appreciation and admiration for Bishop John Folda as the spiritual leader of the Fargo Diocese. Mary was a devoted and loving mother to her children, her grandchildren, and great grandchildren. She loved them unconditionally and had immense joy and pride in their many accomplishments. Mary’s legacy is her faith and her family. Mary is survived by seven sons and one daughter, Matthew (Susan) Noah and their children, Joseph, Benjamin (Hope Evenson), Michael, Luke, Gabriel, Peter and Katherine; Lisa (Michael) Harvey and their children, Noah (Berit Wallevand), Samuel, Jacob and John (Sydney) Harvey and their children, Avery and William; David (Carla) Noah and their daughter, Rachel; Paul (Geneva) Noah and their children Bergen, Gianna and Jude; Mark (Gretchen) Noah and their children Margaret, Kelly, Mary, Mark and Katherine; Dr. Thomas (Kim) Noah and their daughters, Ellie, Sara and Drew; Andrew Noah and Christy Panther; and Christopher Noah and his daughter, Riley; as well as several beloved nephews, nieces, and godchildren. Mary was preceded in death by her husband, John Noah, and her brothers, William, Duane, John Vincent, Michael, Patrick and Robert; sisters, Adeline and Lorraine, as well as many other loved ones. The family would like to express a very special thank you to Lisa and Michael Harvey who opened their home to our mother these last two years and to Mary’s granddaughter, Kelly Noah, and her grandson’s wife, Sydney Harvey, who were Mary’s primary caregivers over this time. Their loving care was a blessing and appreciated by us all. The family would also like to thank Dr. Greg Orson as well as the staff at Hospice of the Red River Valley for their wonderful care, particularly Nurse Hannah Osland and CNA Heather Renfrow. Donations in memory of Mary Noah may be made to the John and Mary Noah Endowment at the St. John Paul II Catholic Schools or the Women’s Care Center both in Fargo, ND. Visitation will be at 5:00 pm at Boulger Funeral Home on Friday, March 4th, followed by the Prayer Service at 7:00 pm and then the Rosary. The Funeral Service will take place at noon on Saturday, March 5th, at St. Anthony of Padua Catholic Church.Livestream will be available at www.Boulgerfuneralhome.com. Mary's Video Tribute can be viewed below: