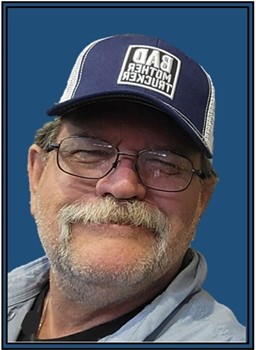 https://vimeo.com/event/1900840 There are some technical difficulties with the churches wifi. The prayer service is being recorded and will be posted tomorrow asap. We apologize for the inconvenience. Michael Ray Rohrich was born on July 30th, 1964, in Fargo, ND to Leo Rohrich and Mary Lou (Johnson) Rohrich. He passed away from natural causes in Albuquerque, NM on February 16, 2022. Mike grew up and attended school in West Fargo, ND, graduating from West Fargo High School in 1982. Mike married the love of his life, Brenda Patterson. They just celebrated their 11th anniversary on February 4th. Mike joined the United States Army and spent 4 years between Missouri, Germany, and Texas. After Mike got out of the Army, he enjoyed racing in West Fargo and Glyndon. He had a few different jobs, but his true passion was truck driving, driving all over the United States. He spent endless hours on the phone talking with family and friends. During the summer when he was not on the road, he and Brenda were always at the lake. Mike loved when his kids and grandkids came. He could sit and watch them play out in the yard or he would take them out on the lake fishing, eyes shining with pride when the young ones would catch a fish or laughing his big belly laugh when he would take his kids and grandkids tubbing and watch them go flying off. Mike is survived by his wife Brenda, mother Mary, sons, Justin (Gina) and Cody (fiancée Mercedes), daughter’s Amanda (fiancé Mike) and Dakotah; his brothers, Scott (Heidi) and John (Korene) and sister Lori Wertz (Lonnie); Grandchildren – Austin, Sophie, William, Madyson, Easton, Mayson, Dawson, Louie, Bodie and Casey; mother-in-law, Carol Thompson, step-son Ryan Patterson, brothers-in-law, Stan (Deb), Kevin (Steph), Richard (Claudette), Damon (Sherry), Robert (Sunny); Goddaughter Jennifer Boland and Godson Randy Dearinger; nieces, nephews, aunts, uncles, cousins, his many truck driving buddies; and his two dogs, Bear and Rocky. Mike was preceded in death by his dad, Leo Rohrich, his paternal and maternal grandparents, his father-in-law Stan Thompson, and other extended family, and friends. The family would like to thank Truckersfinalmile.org and ask you to support their organization. Visitation will take place from 5-7 PM followed by a prayer service at 7 PM Monday, February 28, 2022 at Blessed Sacrament Catholic Church, West Fargo. Visitation will continue from 9-10 AM followed by a funeral service at 10 AM Tuesday, March 1, 2022 at the church. Burial will take place at Fargo National Cemetery.