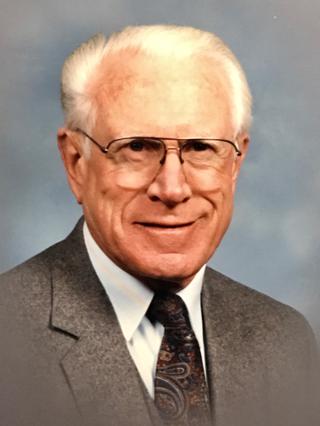 Neal McClure, was a wonderful man, devoted husband, and ideal father and grandfather. He died at 103, at Bethany Nursing Home, April 11th. He was born near Grand Rapids, ND, November 21, 1916, the eldest child of Charles and Lena (Muske) McClure. Neal was raised on a farm near Bowbells, ND that had been homesteaded by his grandfather, Peter, in 1898. He was the oldest of four siblings: Melvin, Richard, Lorraine, and Yvonne. After graduating from Bowbells High School, he attended college at what is now NDSU, graduating 1939. During his college years, Neal was involved in a number of campus organizations, a fraternity, and played on the Bison football team. On June 14, 1941, he married Luella Larson of Fargo. They enjoyed 70 years together in a wonderful, loving, marriage until Lue’s death in 2012. He was devoted to his wife and it showed, as she was routinely presented with coffee in bed most every day. During WW2, he was a naval N.C.O. assigned to training new recruits at Camp Farragut near Coeur d’Alene, Idaho and later stationed in San Diego, CA. He also spent time overseas during the Korean War as an engineering officer, 3rd Infantry Division. Returning home, he continued his long career with the US Department of Agriculture, taking him and his family to Cavalier, Devils Lake, and Grand Forks. In 1967, he was transferred to the state office in Bismarck as the Assistant State Conservationist of ND. After retirement, he worked as the Executive director for Rural Water ND and later, worked part-time for the Burleigh County Water Board. In each city, Neal and Lue formed many lasting, meaningful friendships with many people they truly cherished. They were always involved with the Lutheran Church, serving, singing in the choir, and attending bible studies. Neal especially enjoyed bird hunting and golfing. He was much better at hunting. Neal was proceeded in death by his wife Luella, his brothers, sisters, and Lue’s nine siblings. He is survived by two sons, Brian (Dorothy), Ron (Pat), three grandchildren, Karen, Michael, Scott, and one great-grandchild, Noah, as well as many nieces and nephews. Neal was a true gentleman all his life. He exemplified kindness, patience, thoughtfulness, and a strong Christian faith. Neal, simply stated, was one of the nicest persons you would ever want to know. No memorial arrangements have been set at this time.  Arrangements by Boulger Funeral Home.