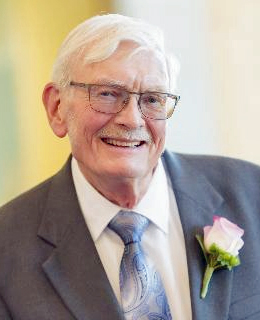 Norris J. Thompson (a.k.a. Rip, Rippy, Noonie, Junior, husband, dad, or grandpa), 79, Audubon, MN, died peacefully on Tuesday, December 1, at Sanford Health surrounded by his family. Norris Mustad was born on February 15, 1941 in Sharon, ND, to Norris and Doris Mustad. Norris lived in Hope, ND until he and his brother Vernon were later adopted by Lawrence and Dorothy Thompson. They moved to Fargo where he attended Fargo Central, graduating in 1959. After high school, Rip and Vern created great memories involving fast cars, motorcycles, pizza, beer and newspapers. Rip began delivering newspapers which started his long career at the Fargo Forum. Rip met Janice Backer in 1966 and they married on October 19, 1968 in Lisbon, ND. Before having their daughters Naomi and Nikki, they created memories with friends and established their bug for traveling. Rip lived with his family in Fargo until he and Jan moved to Little Cormorant lake, a place they both loved. Rip worked at the Forum for 57 years, retiring in the fall of 2019. He was a legend at the Forum. His office was filled with tools, plants, pictures, coffee, his latest projects and maybe even Christmas garland. Rip, or Norris as most people at the Forum knew him, was passionate about his work. He fixed anything and everything it took to get a newspaper out the door and he couldn’t imagine doing anything else. Rip was a sentimental, quiet observer of life until you heard his laugh. He loved to laugh and you couldn't help but smile when you heard it. He was your go-to if you needed something fixed or a problem solved, always at the ready with tools in his pockets. A few of the things that made Rip the happiest were reminiscing, WWII airplanes, machinery of any kind (the older the better), sappy movies, traveling (especially to the ocean), tools, tinkering, flannel shirts, vests and family. He was immensely loved and we will miss his sweet and sentimental presence, smile, laughter, wit, hugs, quiet moments and his heartfelt, "Well, I love you too." Rip is survived by his wife Jan and furry loves, Jack and Jill; his daughters Naomi (Michael) Benson and Nikki (Joel) Johnson; his grandchildren, Ben and Nate Aufman and Zack, Noah, Josh, and Amara Miller; his brother Vernon (Marcia) Thompson; brothers Harlan (Rita) Johnson and Dennis (Melody) Johnson; sister Lois (Jerry) Peterson; many sisters and brothers-in-law, cousins, nieces, nephews, and friends. Norris was preceded in death by his parents, his sister Betty and brother-in-law Jack Shull and his nephew Chad Johnson. Due to current restrictions, a private funeral will be held on Tuesday, December 8, at 11 am in St. Francis Xavier church, Lake Park, MN. Rip’s family invites you to join the livestream of his funeral through Boulger Funeral Home. To sign the online guestbook and view the service, visit www.boulgerfuneralhome.com. They also invite you to take some time that day to remember and reminisce about him, have some great laughs, and wear a flannel.