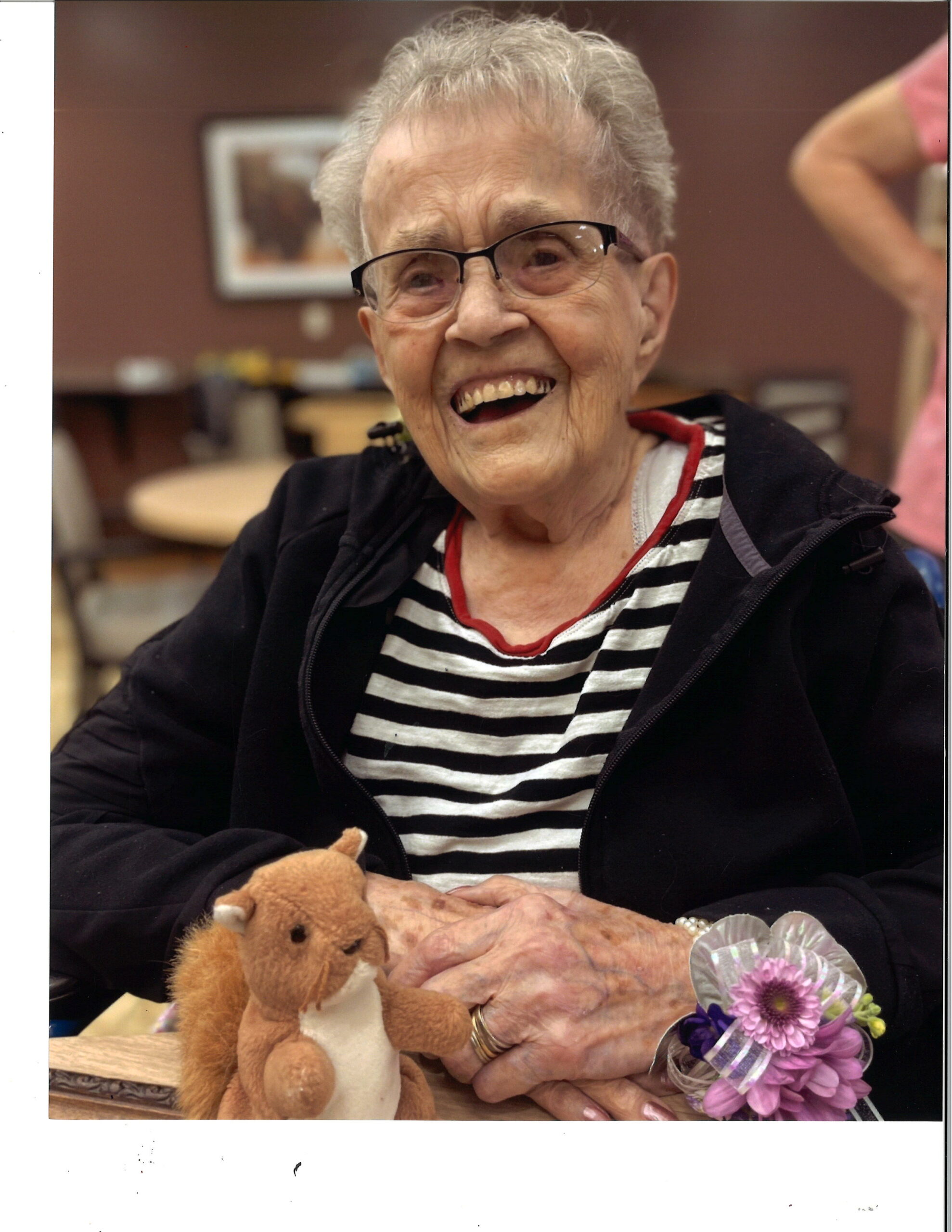 On August 26th, 2022, Olga Jacobson decided that after 96 well-lived years, it was indeed time to go home to Jesus and to reunite with her dearly missed dancing partner and husband Merle, who preceded her in death.

Olga Christine Solsten was born August 11, 1926 in Griggs County, North Dakota, to Norwegian immigrants, Martin and Marit Solsten. She and her siblings’ first language was Norwegian. She learned English in school and graduated from Cooperstown High School in 1944. While working on the Jacobson farm, Olga met Merle and the two eloped in Wolf Point, Montana in 1947. They made their home in Rugby and welcomed their son Wayne in 1949. Their daughter Nancy completed their family in 1952. Olga spent many happy years working at Miller Drug in Rugby. She could even be found filling prescriptions while Ralph Miller was away–perhaps taking more liberties than the pharmacy should have allowed–but Olga ran the show. Olga was indeed a busy body: going dancing with Merle at Lee’s Bar or the Eagles in Rugby, baking sunbuckles or Christmas cookies, playing cards, helping clean and organize after a loved one had moved, teaching grandkids to crochet, and often making quilts at the church or for the birth of a great-grandchild. Many of us affectionately have an Olga blanket, or two, or three. While she may have had her own way of doing things, she would praise and encourage you rather than correct you in how you rolled the lefse. She was never one to criticize.

We are grateful for the many years that we got to spend with “grandma Olga”. In 2008, she relocated to Fargo. In the days and weeks leading to her passing, she shared dear moments with her loved ones. We celebrated her 96th birthday with cupcakes and singing, we talked affectionately about Merle the squirrel, she expressed her love and gratitude to her dear children, she laughed, held our hands, and even shared a little bit of sass in her special way. She allowed each of us to say goodbye and have some laughs and moments to fill our hearts until we can again be reunited. Her family will hold onto the special memories including big events, small events, holiday gatherings, and weekly chats on Facetime in recent years.

Olga is preceded in death by her husband of 53 years, Merle; her sister Myrtle (Don) Veile, and many sister- and brother-in-laws.

Her family would like to thank Olga’s friends and extended family that visited her during her years in Fargo. We also cannot overlook the staff at Sheyenne Crossings and Ethos Hospice for their tender care in the last few weeks, especially. Thanks as well go to Deb Wald, her partner-in-prayer. On behalf of Olga’s family, we would like to thank you for joining us in celebrating Olga’s life.