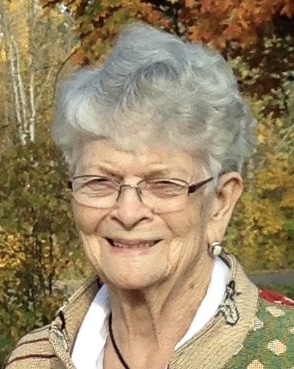 Orlyn E. Robson, 92, passed away January 31, 2018, at Bethany Retirement Living, Fargo, surrounded by her family. Orlyn was born November 2, 1925, to Nels and Emma (Sorenson) Wennberg in Bagley, Minnesota. Orlyn attended Interstate Business College in Fargo, ND. She applied that education in her banking position at First State Bank in Clearbrook, MN where she worked for 20 years. She married Dewey Robson on October 2, 1965. They resided in Clearbrook until 1974 when they moved to Carrington, ND. Orlyn supported Dewey in his beekeeping business. Life with beekeeping allowed Orlyn to enjoy annual winter trips to their second home in southeast Texas where she at times provided food and housing for Honey Company employees.  In Texas she took pleasure in early spring flowers and trips to the Gulf Coast. Orlyn’s faith was very important to her and she stayed active in church throughout her life, participating in Bible studies and service projects and making daily Bible reading a habit. Orlyn enjoyed cooking, shopping, touring the country in their camper, and entertaining family and friends. Dewey and Orlyn retired and moved to Fargo in 2011. They resided at Touchmark Senior Living until health complications demanded she move to Bethany Retirement Living. As Alzheimer’s changed her mind and emotions, her Bible and hymns brought her much peace and she was frequently found with her well tattered Bible open on her chest as she rested. She is survived by her husband, Dewey Robson; children, Lori Chambers, Ron (Dawn) Robson; daughter in law, Sharon Johnson; grandchildren, Michael (Victoria) Chambers, Matthew Chambers, Ethan (Heidi) Johnson, Dana (Andrea) Johnson, Marcus Johnson, Amanda Robson and Luke Robson; 9 great-grandchildren; and nieces and nephews. She is preceded in death by her first husband, Lloyd Johnson; son, Jerel D. Johnson; her parents; siblings, Edsel Wennberg and Mavis Aasland. The family requests that in lieu of flowers donations be made to the Alzheimer’s Association (ALZ.org) or to the Carrington Cemetery.