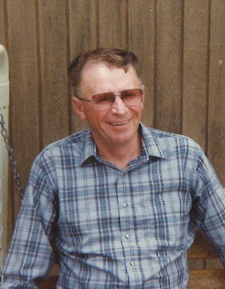 Dick Weston, age 83, passed away Monday, March 25, 2019 at Villa Maria Nursing Home in Fargo, surrounded by his family after a long battle with Parkinson's disease. Richard Erwin Weston was born on October 3, 1935 in Wales, ND, the son of Erwin and Irene (South) Weston. He grew up on the family farm near Sarles, ND where he received his education. Dick was united in marriage to Marion “Snook” Thompson on April 14, 1958. Together they made their home in Sarles where they raised their family and farmed. In addition to farming, Dick was an avid flyer and owned and operated Weston Spraying Service for over 30 years. Snook passed away on September 7, 2002. He retired from farming in 2003 and moved to Fargo in 2011 to be closer to his family. He most recently made his home at Villa Maria in Fargo. His love of family was evident in the many hours he spent planning family trips and traveling during the summer months. He had a passion for classic cars – especially his Oldsmobile’s and ‘57 Chevy. Dick took great pride in his John Deere machinery. Most of all, Dick was a family man. He was extremely proud of each and every one of his children and grandchildren and cherished the time he could spend with them. He could always be found holding a grandchild. Dick is survived by four sons – Keith (Penni) Weston of Fargo; Scott (Sue) Weston of Minot, ND; Mark (Sheri) Weston and Dale (Kristi) Weston, both of Fargo; ten grandchildren – Amanda Weston Caillier (Adam), Javen (Kat) Weston, Andrew (Brenna) Weston, Kevin Weston, Paige Weston, Josh Weston, Bailey Weston, Mikayla Weston, Samantha Weston, and Jordan Weston; and one great-grandchild, Nora Jo Weston. Also surviving are his two siblings – Carol Dietz of Issaquah, WA; and Harold (Gail) Weston of Langdon, ND and sister-in-law Marilyn Weston of Sarles, ND and brother-in-law Dick (Wanda) Thompson of Ashkum, IL. He was preceded in death by his wife, Snook; parents, Erwin and Irene; parents-in-law, Tommy and Mary Thompson; brother’s – Herb and Glenn Weston; and grandson, Brent Weston. The family would like to offer a very special thank you to the staff at Villa Maria in Fargo for the loving care that they provided for Dick and all of his family. VISITATION: 6-7 PM Friday, March 29, 2019 at Hope Lutheran Church South Campus Chapel – and also one hour prior to the service in the church on Saturday PRAYER SERVICE: 7 PM Friday at the church FUNERAL SERVICE: 10 AM Saturday, March 30, 2019 at Hope Lutheran Church South Campus Chapel BURIAL: will take place at a later date at the St. Michael’s Cemetery in Wales, ND