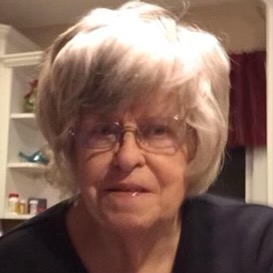 Ruth Audrey (Holte) Palmer (80) passed away peacefully on Tuesday, December 14, 2021, in the care of Vibra Hospital, Fargo. Ruth was born on October 18, 1941, the daughter of Adolph and Gunhild (Bekkerus) Holte in Fargo, ND. She grew up in Georgetown, MN and graduated from Moorhead High School. She married Tim Palmer on February 10, 1968. They made their home in Bothell, WA but eventually moved back to Georgetown, MN and lived on her family’s farmstead where they raised their 3 daughters, Ranae, Christina and Rachael along with several foster children. Ruth was a partner in the family-owned business, Mick’s Office, Moorhead, MN for 20 years. She enjoyed meeting people from all walks of life and was genuinely interested in getting to know every person she met, with many becoming lifelong friends. People that came into Mick’s Office were never just customers, everyone was considered a friend. She was grateful for all of you. Ruth taught ceramics from her home for several years, loved to play pool and enjoyed the many shenanigans she embarked on with her boat trip girlfriends, classmates and close friends. She was considered to be the life of the party, always had a story to tell, was known for asking you to do just “one more thing” and was always up for spur of the moment adventures. While we will miss our mom, grandma, aunt, sister-in-law and friend, one thing we know for sure, is that heaven just became a lot more fun. Ruth is survived by her daughters, Ranae (Jesse) Schmidt; Christina (Anthony Ryan ) Palmer, Fargo, ND; Rachael (Jason) Henning, Golden, CO; 7 grandchildren, Logan, Alexandra, Carson, Zuzu, Walt, Tristan and Alexander; sister-in-laws, Shirley Palmer, Pat Palmer and Charyl Palmer; 10 newphews and nieces; and her furry friend, Ollie (aka. Fluff). She is preceded in death by her former spouse, Tim Palmer; parents Adolph and Gunhild (Bekkerus) Holte.