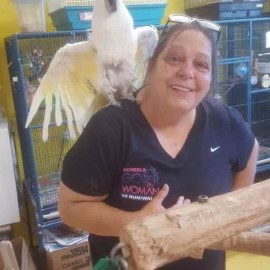 It is with much sadness that we announce the passing of Sherry Lyn (Job) Harrison. But we are sure she is happily in the arms of her daughter Sonia.

Sherry Lyn Job Harrison was a “mom” to many. Many family and friends will miss her giving soul, whether it was a shirt or a meal. She would give you the shirt off her back if it would help you.

Sherry was born to Betty Jean and Walter (Bud) Job Sr. on September 29, 1956, at St. Vincent’s Hospital just outside of Portland Oregon. She went to be with her beloved daughter Sonia on September 3, 2022, just short of her 66th birthday.

Sherry’s life started with two younger brothers Larry and Fritz. She went to grade school in Tumalo, Oregon and later attended high school in Cleveland, ND. She moved to Bakersfield, CA and was united in marriage to Albert Lee Harrison on October 20, 1979. From this union Sonia Jean was born February 5, 1983. Sherry and Sonia lived in Fargo many years. Unexpectedly Sherry lost Sonia on August 14, 2015.

Sherry will be met by her mother, Betty Jean, and her beloved daughter Sonia.

A celebration of life will take place September 16th at Boulger Funeral Home at 2 pm with a visitation one hour prior. Burial will be September 24th at 1 pm in Windsor, ND with a lunch to follow at the Windsor Hall.