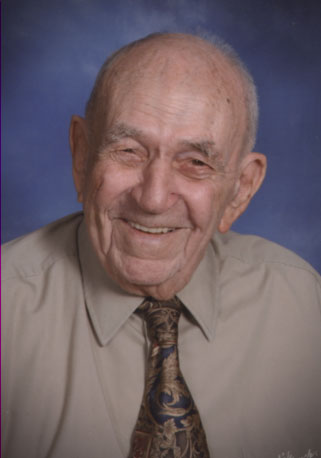 Vernon passed away on Thursday, February 19, 2015 at the Hillsboro Medical Center Nursing Home at the age of 90. Vernon was born on July 31, 1924, the son of Oscar and Inga (Froslie) Olsen in Enderlin, ND. He grew up in this area and received his education graduating from Enderlin High School. He proudly served his country in the United States Navy, where he was awarded the Asiatic-Pacific Campaign Medal, the American Campaign Medal, the World War II Victory Medal and the Philippine Liberation Medal. In the years following, he was a brakeman for the Soo Line Railroad, went to watch school in Elgin, IL.  and owned his own jewelry store in Hillsboro, ND.  He entered the insurance business and retired as the Branch Claims Manager for Continental Western Insurance Company after more than 25 years in the field. Vernon was married to Bette George, also of Enderlin, ND, and together they raised their six children primarily living in Hillsboro.  Bette passed away in March of 2010." Vernon is survived by his six children - Jack (Susan) Olsen of Richmond, VA; Barbara (Ken) Schacht of Miami, Fl; Jeff (Rose) Olsen of Tampa, FL; Marcy (Michael) Ohren of Papillion, NE; Stephanie (Tom) Olsen of Hillsboro, ND; and Stacy (Jeff) Panneck of Tucson, AZ; his 21 grandchildren, 32 great-grandchildren, and 7 great-great grandchildren. Also surviving are his nephew, Gary (Sandra) Olsen, and his niece, Carol Olsen. He was preceded in death by his parents; and his brother, Quentin. Memorials are preferred to the Sanford Hillsboro Medical Center Auxiliary, Our Savior’s Lutheran Church, or to Hospice of the Red River Valley