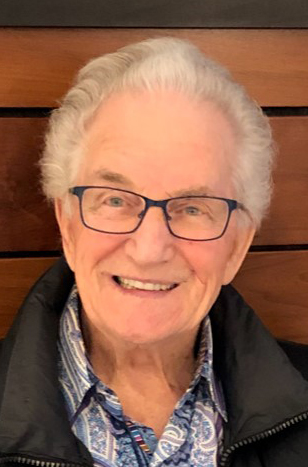 The services for Victor can be viewed below starting shortly before their start times:

Victor Louis Gelking of Fargo, ND passed away on Monday, July 18, 2022 surrounded by his loving family. He was 95 years old.

Victor was born in Minot, ND on June 7, 1927 to Louis and Helen Gelking. He attended Minot schools until enlisting in the Marines at age 17. He was stationed at Camp Pendleton, CA until his discharge following the end of the war. During his military service, he began taking dance lessons, sparking what would become a lifelong love for dancing.

Victor then moved to Bremerton, WA, where he worked in the shipyards until returning to his home town of Minot, ND, where he began working for the railroad full-time, as well as, taking flying lessons under the GI bill. He continued his flight training, eventually obtaining his private, commercial, twin engine and flight instructor ratings.

In June of 1951, he married his first wife, Gloria Susak. They made their home in Minot, ND where they raised 4 daughters together.

In 1956, he opened two businesses with his wife Gloria: Minot Aircraft Sales & Flight School and Victor’s Dance Studio, while maintaining his mainstay job as a Railroad Brakeman Conductor. Whenever he wasn’t flying or dancing, his friends and family could find him playing basketball, golfing, fishing, or water skiing.

In 1980 he moved from Minot to Fargo where he continued to work for the railroad until his retirement in 1989 at the age of 62. He brought with him his love of flying and dancing – opening Victors Dance Studio and Vics Aircraft Sales in Fargo. In 1989, he married his wife, Sylvia Rue.

His passion for dancing and flying was unwavering until retiring both of his businesses at the age of 91.

Donations can be made in Victor’s memory to Alzheimers Association, American Heart Association or Fargo Air Museum.