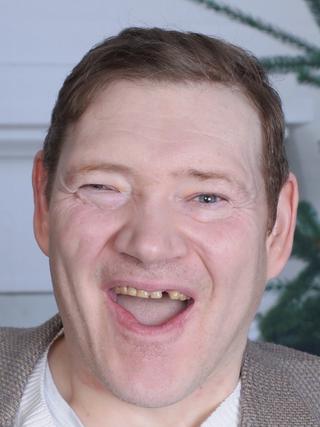 Ward “Wardy” Farrel Ralston, 54 passed away surrounded by love at Sanford Medical Center on Wednesday, February 12, 2020. Ward was born to Vance and Patricia Ralston on July 26, 1965 in Fargo, ND. He was the youngest of five half-brothers and half-sisters. Ward was very much a social, musical force like his father. He had a special relationship and became very connected with his stepmom, Angie Ralston. Ward was happy to have reconnected with his mother, Patricia in his later years. Ward attended the Opportunity School and Woodrow Wilson in Fargo, ND from 1969 to 1972. Ward then attended the Helen of Stuart Special Education School in Las Vegas, Nevada from 1972 to 1974. From there, Ward returned to Woodrow Wilson from 1974 to 1979 before attending Lewis and Clark School in Grand Forks in 1979-1980. In 1981 Ward started to receive respite care from Friendship where he then found his forever home and bonus family with CHI Friendship in 1985. Ward tried various employment opportunities over the years including owning a self-employment business for a short period of time making his own aromatherapy items. In recent years, his passion for emergency personnel led him to find an interest and assist with setting up items for CPR classes. He was also active in his community by volunteering at the Fargo Air Museum. Ward was a special man who made a difference in this world. He had a tremendous love of fishing, fire trucks/ambulances, Santa Claus and music. He could often be found taking gadgets apart, singing, watching Lawrence Welk, playing his guitar and accordion, fishing in his living room, or watching videos of his favorite things on YouTube. Grateful for having shared his life are his siblings, nieces/nephews, many friends, and so many past or present CHI Friendship employees. He was preceded in death by his father Vance Ralston, mother Patricia Vacura, stepmother Angie Ralston and his brothers, John and Tom Ralston. Ward had an amazing ability to make connections and a personality that could fill a room. Ward had a kind, joyful, and free spirit that will be greatly missed. Ward’s Celebration of Life Service will occur on Monday, February 24th at 5pm at CHI Friendship 801 Page Drive, Fargo, ND. All are welcome to attend. In lieu of flowers, memorial donations can be made in memory of Ward to your favorite charity or your local fire department.